We are in the midst of the largest vaccination rollout in history as the world strives to move beyond the ravages of the coronavirus pandemic.

Manufacturing billions of doses and then getting them into people’s arms was always going to be a huge logistical challenge — even without the political and economic obstacles that have made it more difficult.

In the US, COVID vaccines have become another flashpoint in the culture wars, slowing the vaccination drive. Internationally, arguments have raged over the ethics of rich countries giving booster shots while most people in the world’s poorest nations have yet to receive their first vaccine dose.

The charts and maps below will update to show the most recent vaccination data for the US and across the globe. 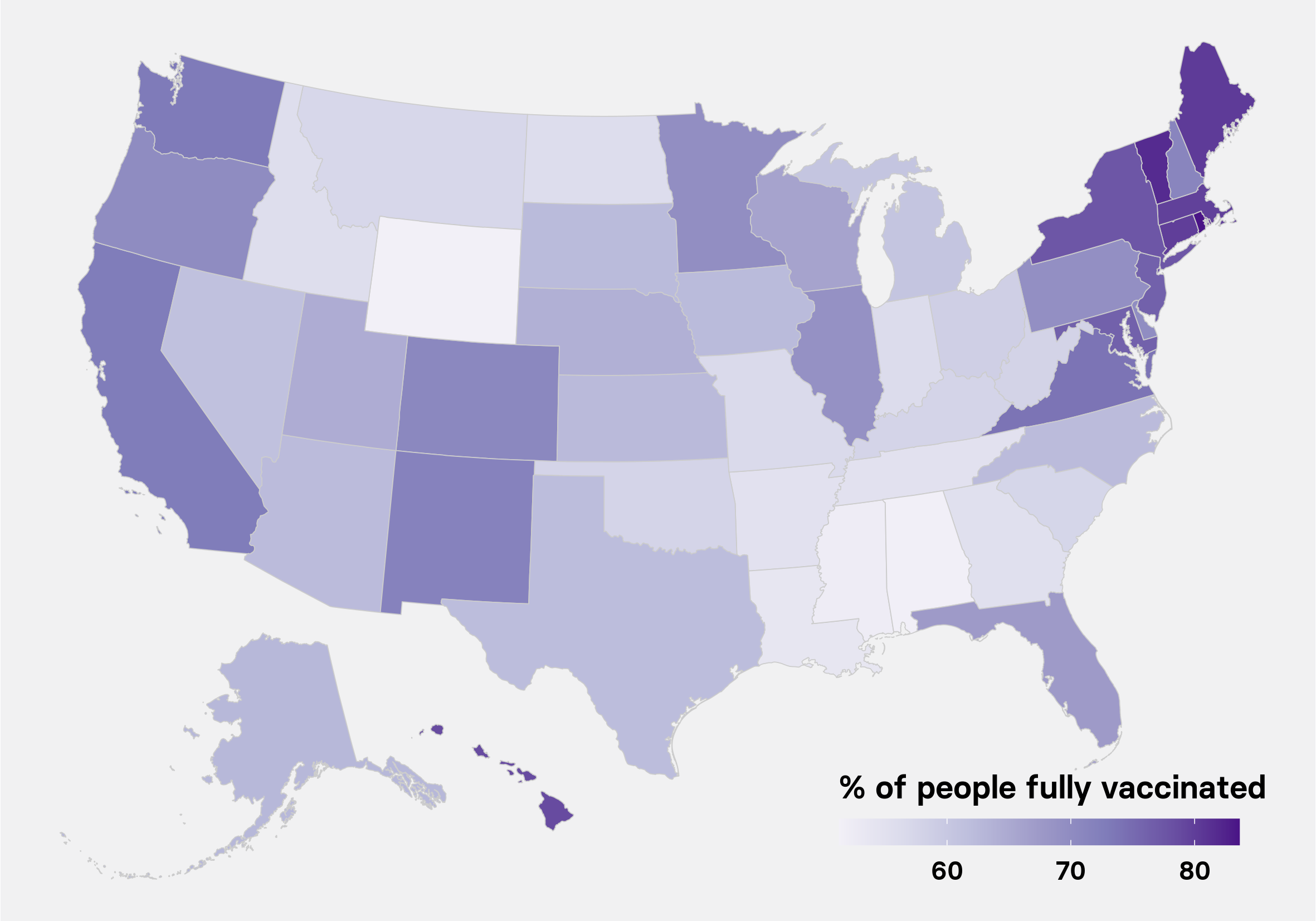 There are notable differences from state to state in how quickly the vaccines are being given to people.

The first two vaccines approved for emergency use in the US, developed by the companies Pfizer/BioNTech and Moderna, were designed to be given in two doses several weeks apart. The one-dose Johnson & Johnson vaccine was authorized for use in late February. Since September, the FDA has begun authorizing booster doses for those at higher risk. The map above is based on total doses given, including any booster shots.

Search or navigate through this table to find how your state or territory is doing on these key measures of vaccine rollout.

This chart shows the daily number of vaccine doses given to people across the nation from the start of 2021. Because of spikes in the data due to lags in reporting, the line showing the seven-day rolling average of doses gives a clearer idea of whether the rollout is accelerating or slowing.

As the Biden administration took over in January, promising stronger federal coordination of the vaccine rollout, the number of shots given daily increased steadily, hitting a peak of more than 3 million doses a day in April. Then the program began to stall, hampered by suspicion of COVID vaccines among many conservatives — especially in rural areas and the South.

The slow increase in daily doses given from the start of July followed the rise of the highly contagious Delta coronavirus variant. But this was not sufficient to prevent a large surge in deaths, overwhelmingly among unvaccinated Americans.

Via Our World In Data

Countries colored in gray have either not started vaccine rollout or have not reported this data. Peter Aldhous / BuzzFeed News / Via Our World In Data

Countries colored in gray have either not started vaccine rollout or have reported no data. Peter Aldhous / BuzzFeed News / Via Our World In Data

More countries appear on this map showing vaccine doses given per 100 people because these numbers are more widely reported.

The percentage of people who are fully vaccinated and the number of doses given per 100 people depends on data reported by governments. Gibraltar has reported vaccinating more people than live in the territory. Peter Aldhous / BuzzFeed News / Via Our World In Data

Search or navigate through this table to see how many vaccines each nation has administered.

While wealthier countries have vaccinated a large portion of their populations, many developing nations — particularly in Africa — still have very low vaccination rates. “This doesn’t only hurt the people of Africa — it hurts all of us,” World Health Organization director-general Tedros Adhanom Ghebreyesus said in September. “The longer vaccine inequity persists, the more the virus will keep circulating and changing, the longer the social and economic disruption will continue, and the higher the chances that more variants will emerge that render vaccines less effective.”

Peter Aldhous / BuzzFeed News / Via Our World In Data

This chart shows the reported daily number of vaccine doses given to people across the world. Because of spikes due to lags in reporting, the line showing the seven-day rolling average of doses gives a clearer idea of whether the rollout is accelerating or slowing.

This table documents the status of leading COVID-19 vaccines, showing authorizations for use in the US and other selected markets plus prices from information on purchase agreements compiled by UNICEF, where available.

The highly effective vaccines from Pfizer/BioNTech and Moderna are based on a new technology that delivers a sequence of RNA that makes our own cells produce viral protein, triggering an immune response.

The drawback is that these vaccines are more expensive than those made by splicing genetic material from the coronavirus into a disabled version of another virus. Examples of such vaccines include those produced by the Anglo-Swedish company AstraZeneca, based on research from Oxford University, Johnson & Johnson, and Russia’s Gamaleya Research Institute.

Other leading vaccines are based on inactivated versions of the coronavirus, a longstanding approach to making vaccines, or subunits of viral protein. One vaccine, from the Indian company Zydus Cadila, delivers a genetic sequence that makes a viral protein inside loops of DNA.

More on COVID-19 and vaccines