The journalists at BuzzFeed News are proud to bring you trustworthy and relevant reporting about the coronavirus. To help keep this news free, become a member and sign up for our newsletter, Incoming.

COVID-19 has spread across the globe with devastating impacts. The charts and maps below will update to show the most recent data on case numbers and deaths, internationally and in the US.

US cases by date reported 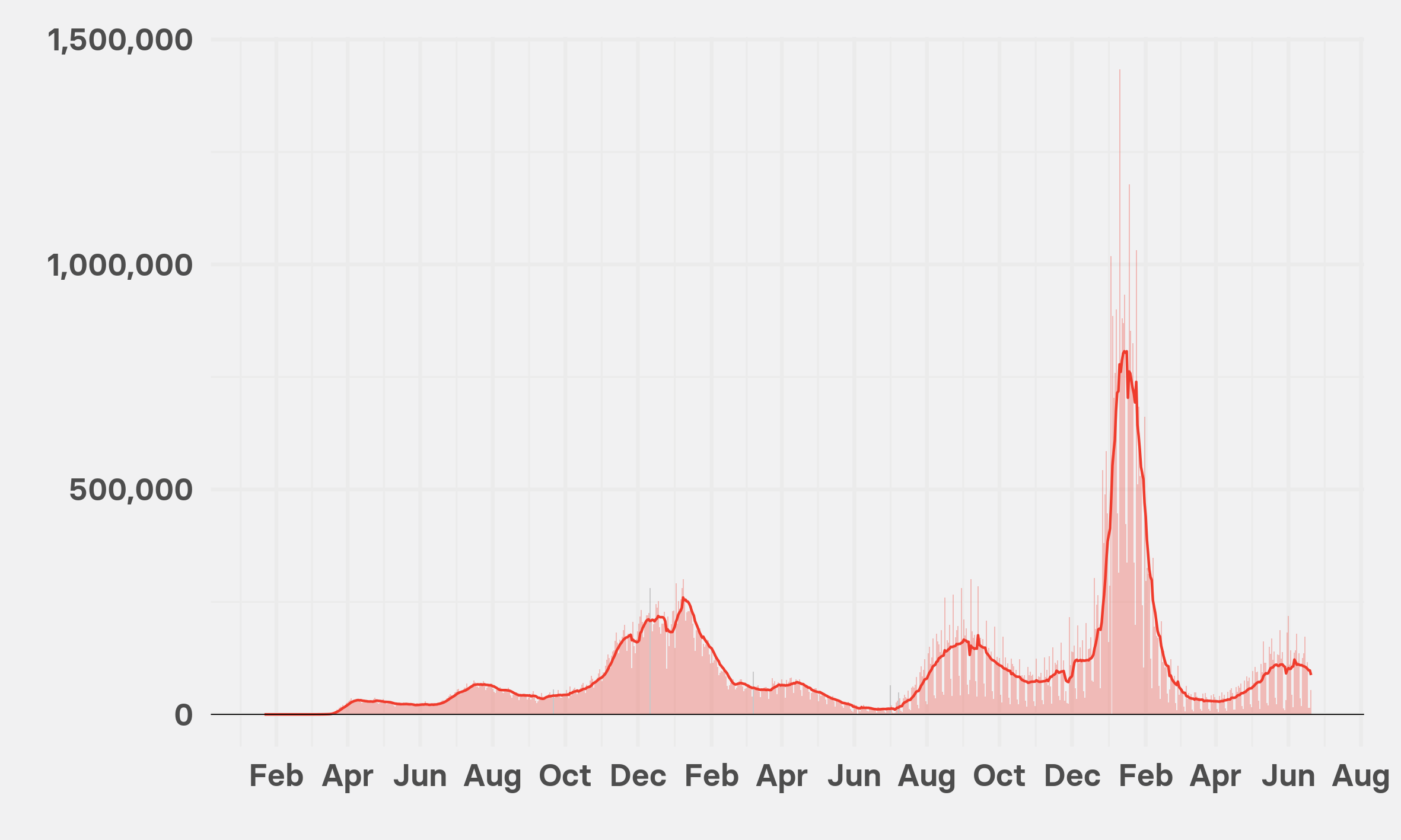 This is what epidemiologists call an epidemic curve, showing the number of new cases per day. Because there are weekly patterns in the reporting of cases — for example, lags in reporting data over the weekend — we have also plotted a line showing the seven-day rolling average of new cases to see the overall trend.

The number of recorded cases will depend on the extent of testing for the virus, which has greatly expanded since the start of the pandemic.

US deaths by date reported 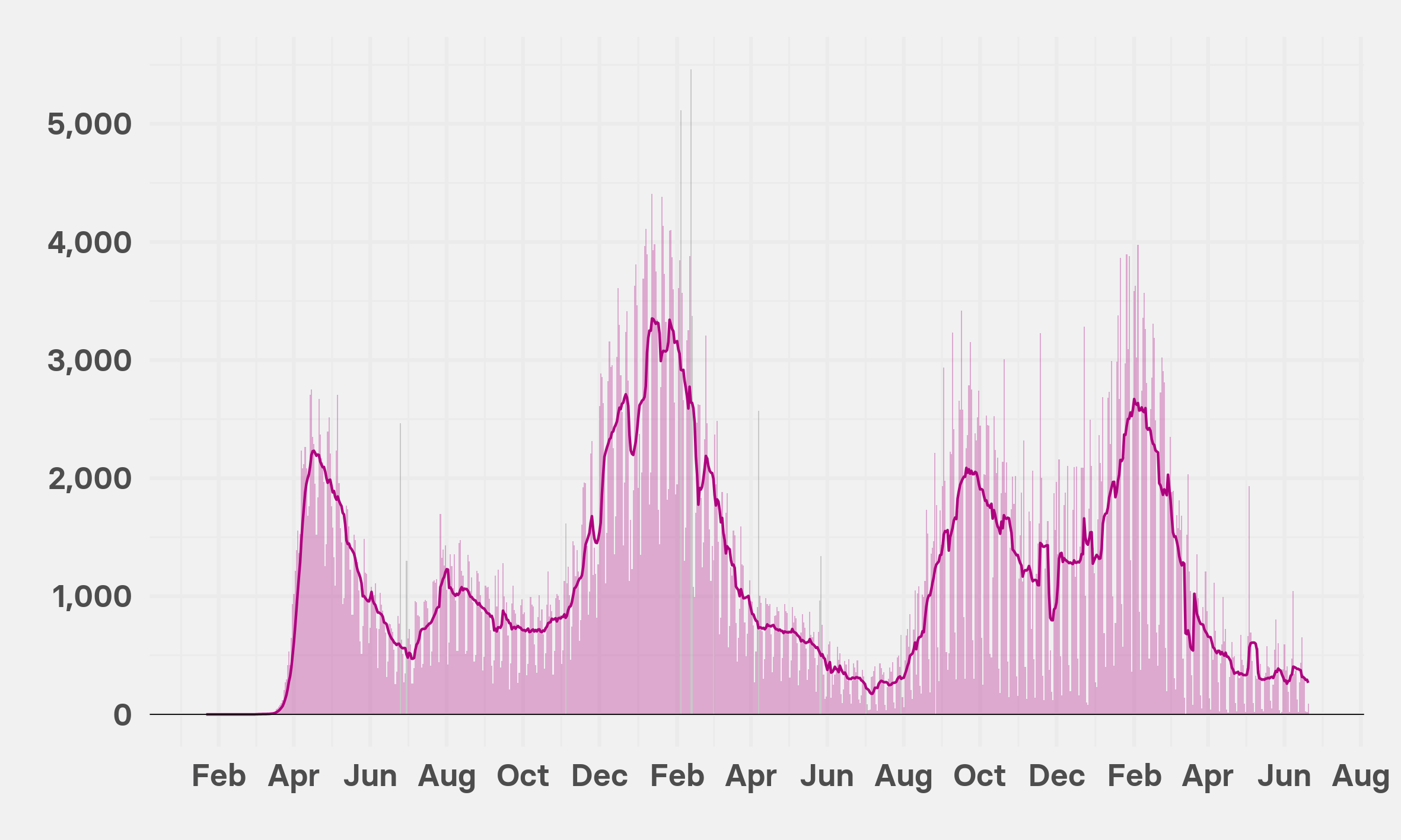 The US has seen several surges in COVID-19 cases and deaths, peaking first in April 2020 due to outbreaks in cities including New York, Detroit, and New Orleans, and then in July when cases exploded across the Sun Belt states of the South and West. The third and largest surge began in the Upper Midwest in September and spread across most of the nation, as more people gathered indoors during the cooler weather. Cases and deaths began to decline again in January 2021, weeks after the start of the US vaccination campaign. The steep rise in cases starting in July 2021 was triggered by the rapid spread of the highly transmissible Delta coronavirus variant. 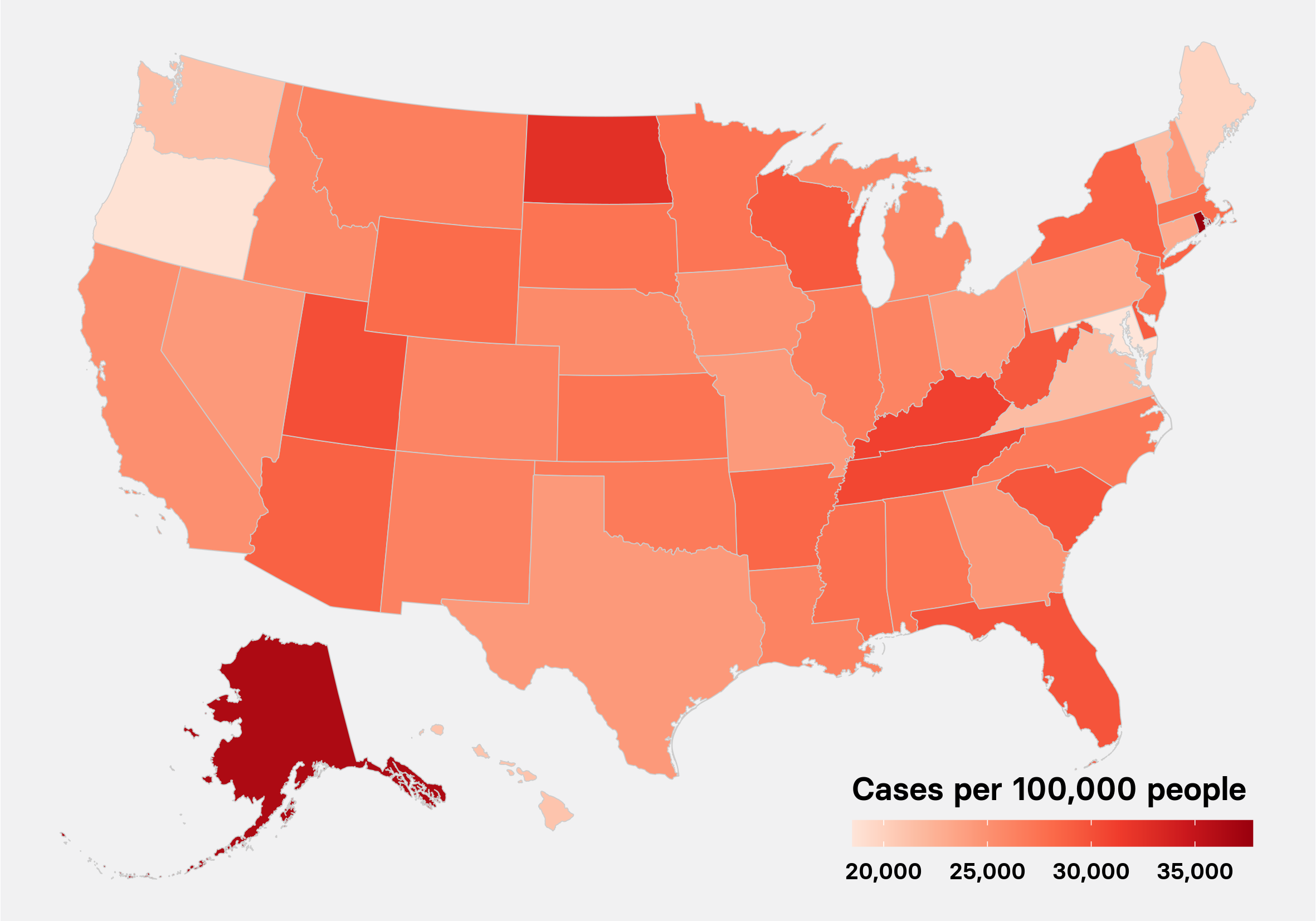 This map shows the total number of confirmed COVID-19 cases by state, relative to their population. 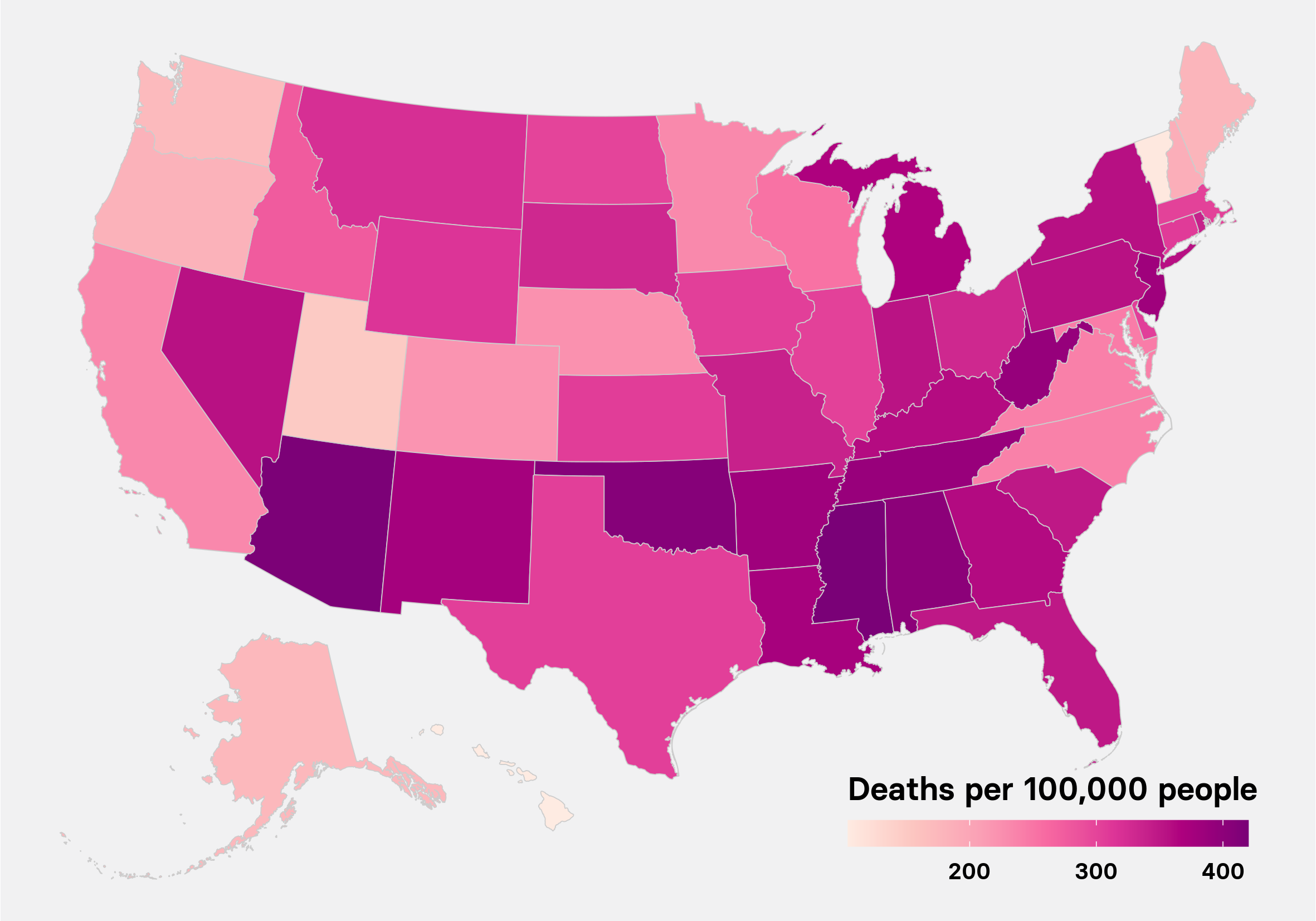 See our county-level maps for a more detailed view of case rates and death rates across the US.

Total cases and deaths by state

Where cases are surging and declining 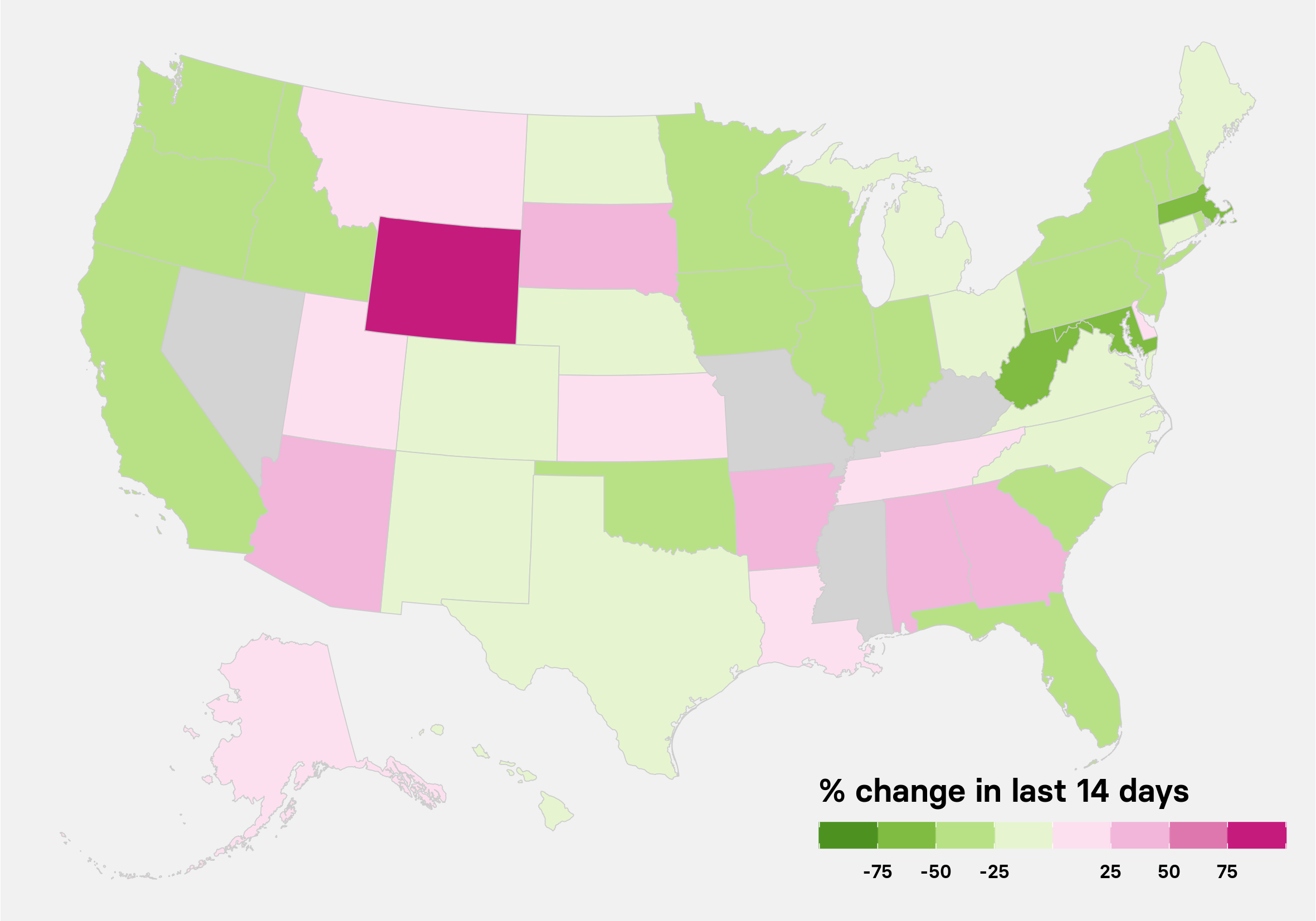 States where the seven-day rolling average of daily new cases has surged in the last two weeks are shown in pink; those where cases are declining appear in green. Any state in which the change is less than 5% in either direction, or in which very few cases have been recorded, is colored gray.

This table breaks down the surges and declines by state, showing the trajectory of new cases as a 7-day rolling average. The bars record total case rates per 100,000 people. The table is sorted according to the states’ populations, from largest to smallest.

See our US COVID-19 surges tracker for a view of surges and declines in COVID-19 cases at the level of individual counties. 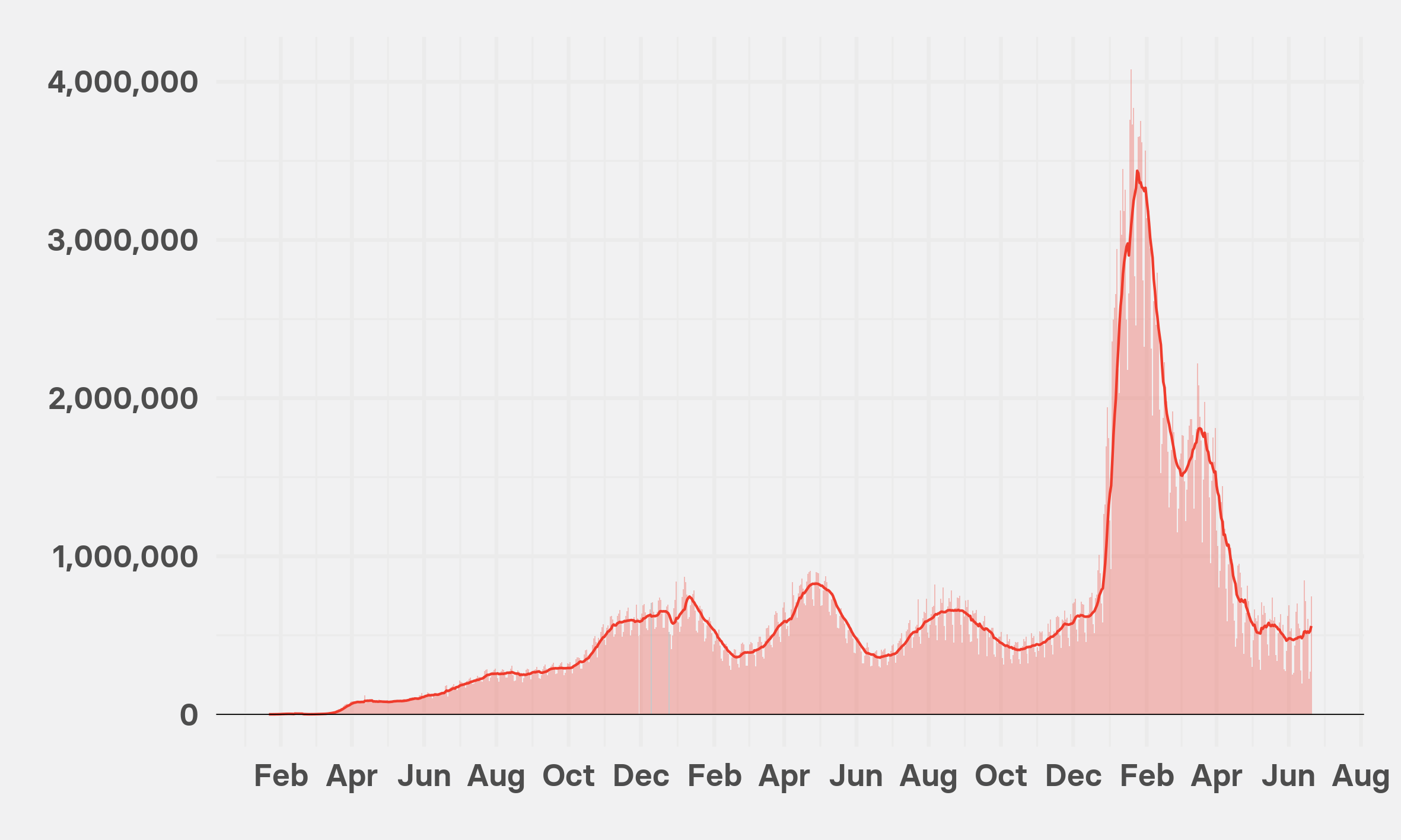 Globally, the daily number of new cases grew through most of the pandemic, peaking in January 2021 with the height of the third US surge. New cases then declined sharply until mid-February. The subsequent two surges have been driven largely by new and more transmissible coronavirus variants. In the spring, surges in Europe caused by the Alpha variant, which first emerged in the UK, were followed by the emergence of the even more transmissible Delta variant in India. Although India’s devastating surge subsided quickly in May, Delta waves in Europe, East Asia, Africa, and the US have driven cases up once again over the summer. 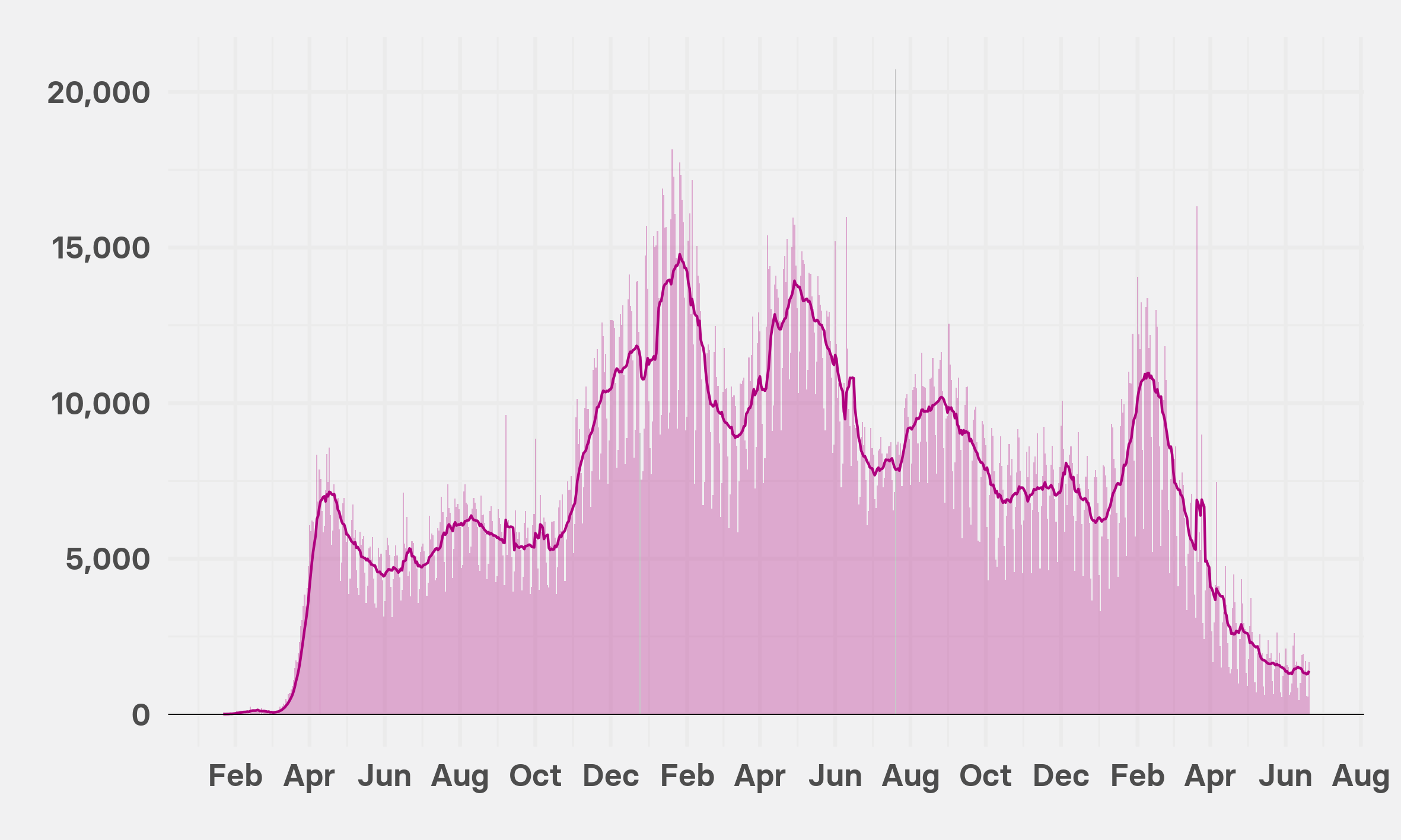 The number of deaths recorded per day across the globe fell from an initial peak in mid-April, when the death toll surged in Europe and the northeast US. Beginning in October, there was a sharp rise in deaths as a second wave of COVID-19 in Europe coincided with a renewed surge of the disease in the US. The peak in deaths in late-April 2021 was driven by the high tolls in India, Latin America, and Europe at this time.

This map shows the total number of confirmed COVID-19 cases so far by country, relative to the size of their populations. Countries shown in white have reported zero cases, while gray means no data.

This shows the total number of recorded COVID-19 deaths by country relative to population. So far, the worst-affected countries are in Europe and the Americas. Peru, which more than doubled its toll after a thorough review of death records published in May 2021, is the country with the highest rate of COVID-19 deaths.

Total cases and deaths by country

Search this table to find the total number of confirmed cases and recorded deaths for any country. The table is currently sorted according to the countries with the highest total number of deaths.