Laura Goode's first novel for young adults, Sister Mischief, was released by Candlewick Press in 2011, was a 2012 Best of the Bay pick by the San Francisco Bay Guardian, and a was a selection of two ALA honor lists for outstanding feminist and GLBTQ literature. She wrote, with Meera Menon, and produced the feature film Farah Goes Bang; FGB premiered at the 2013 Tribeca Film Festival and won the inaugural Nora Ephron Prize from Tribeca and Vogue. Her collection of poems Become A Name is forthcoming from Fathom Books in 2016. Her work has appeared in publications including ELLE, Refinery29, New York Magazine, The Rumpus, Los Angeles Review of Books, The Believer: Logger, Boston Review, IndieWire, and Bright Ideas, where she is a contributing editor. She received her BA and MFA from Columbia University, and lives in San Francisco. www.lauragoode.com 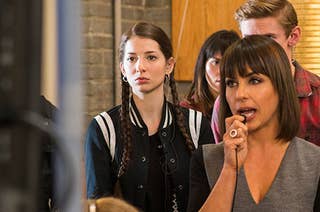 Lifetime’s grown from “guilty pleasure” to a critically acclaimed home for groundbreaking television. How? By hiring women. Here, a feminist history of “television for women.”