4 Reasons Tesla Is Killing It

By
by Matthew Zeitlin

Ignore the bankruptcies and scandals that have bedeviled other green tech companies that were supposed to save the world: Tesla Motors, the brainchild of PayPal founder and Tony Stark inspiration Elon Musk, not only has the top-rated car by Consumer Reports, its Model S, but also a soaring stock. Tesla shares broke through the somewhat arbitrary but psychological meaningful $100 barrier this morning, tripling this year and doubling just in the last month. Here's why: 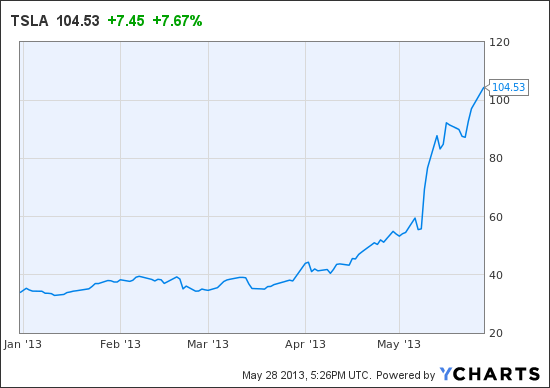 1. The company is actually making money.

As illustrated by its most recent financial results, released May 8, Tesla is no longer an all-growth, no-profit tech company. It turned its first quarterly profit, booking $11.2 million in net income after an $89.9 million loss the previous quarter. And while the company just went into the black, its revenue growth has been truly astounding. Tesla booked just over $30 million in last year's first quarter; this year it was just under $562 million.

Sales of Tesla's Model S outpaced its three German luxury competitors — the Mercedes S Class, the BMW 7 Series, and the Audi A8, in the first quarter. The Model S' early success could start building on itself, thereby breaking out from being a niche product for socially conscious Silicon Valley types.

"We expect consumer awareness of the brand to grow, and word of mouth to increase as more cars hit the road," said two Jefferies analysts in a note released after Tesla announced its first quarter earnings. The rash of positive media attention hasn't hurt either.

The company is pumping out over 400 cars a week and plans to start delivering to Europe in the middle of this year. It is already seeing 200 orders a week in Europe, according to a Goldman Sachs research note. Analysts expect the company to meet its projection for sales of 21,000 Model S's this year.

More than profits, Tesla's stock is up above $100 because investors are expecting the company to become a real competitor to the global auto giants. If Tesla can continue to build cars people want, and build out a comprehensive charging and battery infrastructure, there's no reason it won't continue to grow.

"A big portion of the run-up is basically a reduction in risk to the company achieving its upside potential. Many investors have been skeptics but are realizing that this could be a very large company," said Colin Rusch, a senior analyst at Northland Capital Markets.