18 Stunning Portraits Of Women In Kabul

“I will lose my identity as a human being, a woman, and an artist.”

By
by Kate Bubacz

and
by Kiana Hayeri

Before the recent peace negotiations suddenly broke down — when President Donald Trump announced that he had canceled secret talks with the Taliban — women had been almost entirely sidelined from the conversation about the future of their country.

The US intervention in Afghanistan in 2001 was premised in part on liberating women from the restrictive rule of the Taliban. The last 18 years have seen some progress, and life has improved for some women, allowing them enroll in school, work, and explore simple personal freedoms previously denied to them.

But many of them now fear for the future.

Photographer Kiana Hayeri spoke with 18 women in the Afghan capital of Kabul about their concerns if the Taliban were to regain power.

The Full Story: Afghanistan’s Women Don’t Want To Be Saved. But They Demand To Be Heard.

Hawa Alam Nuristani, 49
Chief of the Independent Election Commission
“In the past 40 years, women were always on the brink of loss. The mothers who lost sons, husbands, and brothers; policewomen who have been martyred; judges who were bound to stay home. I worry that women will lose again if the cost of peace would be bringing Taliban back into power.” 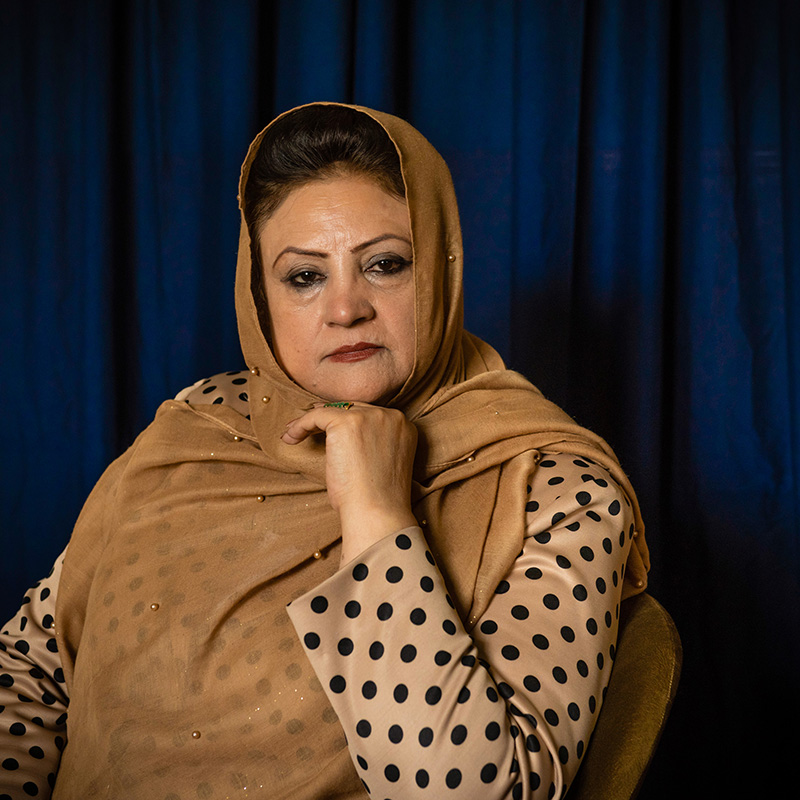 Zarifa Adiba, 21
Student, Former Conductor of the Zohra Orchestra
“The biggest loss for me will be my identity. I will lose that as a woman, and nobody will recognize me as a human being anymore.” 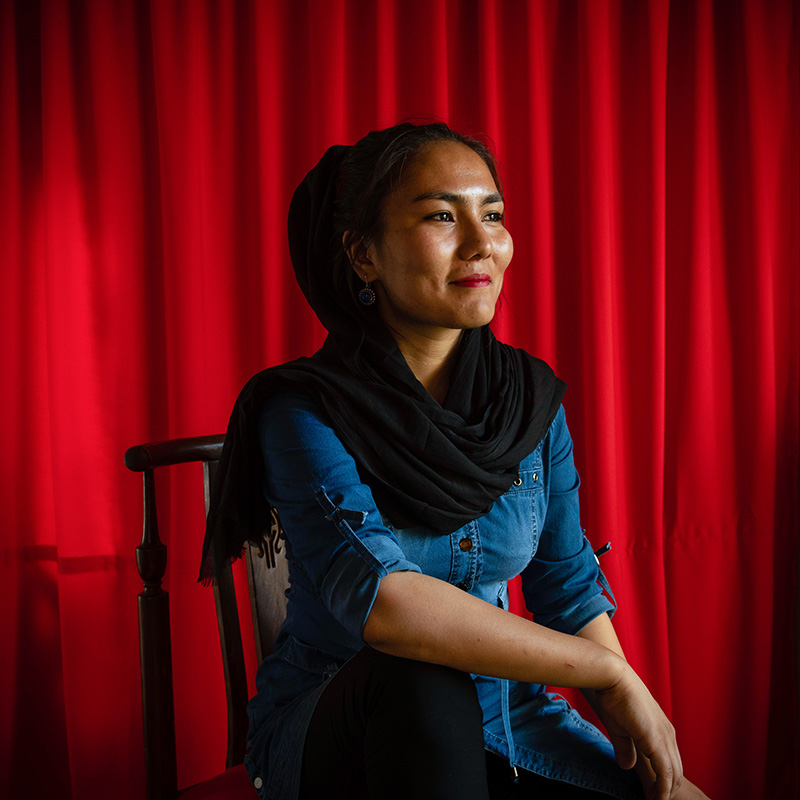 Rada Akbar, 31
Visual Artist
“I will lose my identity as a human being, a woman, and an artist.” 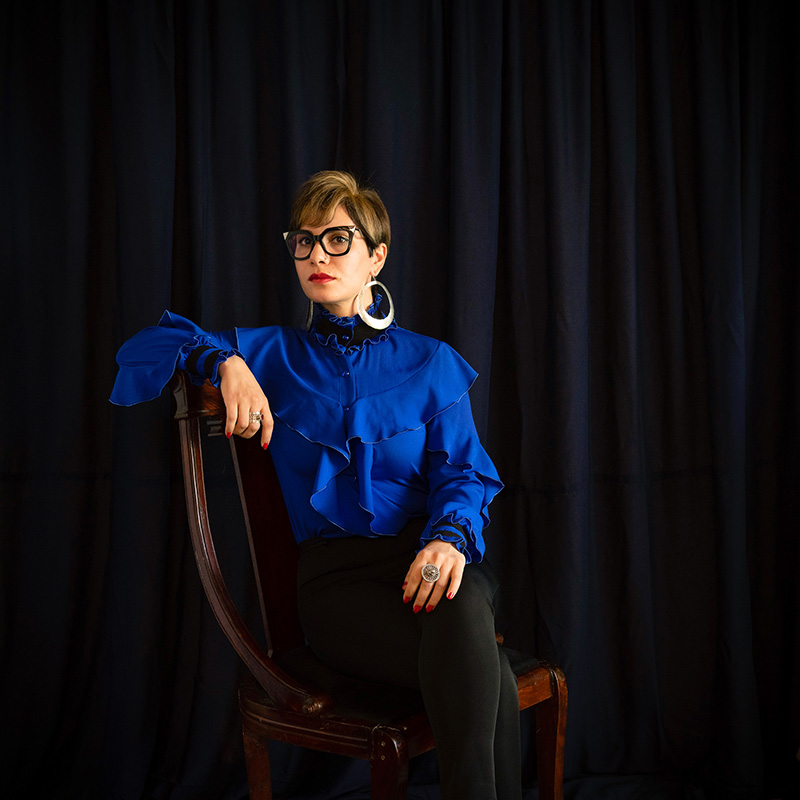 Zahra Hussaini, 27
Program Officer at the Afghanistan Human Rights and Democracy Organization
“In 2014, when I first stepped forward to encourage women to ride bicycles, I had hopes. Then my only wish was to see girls riding their bicycles freely to school, to market, and to work. With the return of Taliban, I sometimes wonder if women can even freely walk on streets, let alone riding the bicycles and driving cars.” 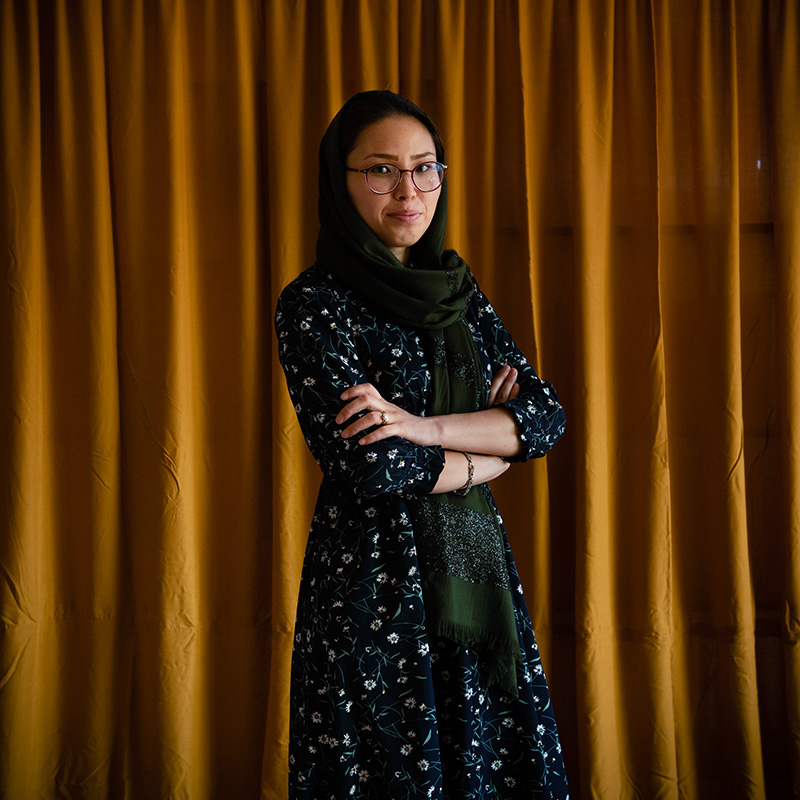 Azima Hamidi, 54
Retired Teacher
“We are tired of war and we want peace, but if Taliban comes back in power, women will be the first ones to suffer. I worry about the freedom of my children and their education.” 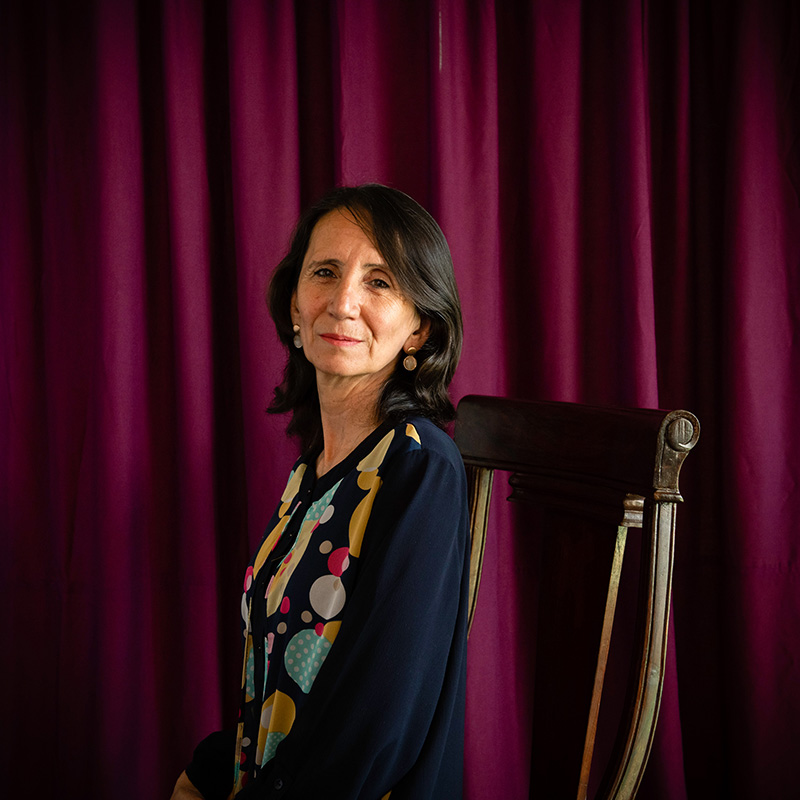 Mahtab Sahel, 27
Poet
“Look at the situation and living circumstances of Afghan women who are already living in areas and districts that are controlled by Taliban. This oppression imposed on them by Taliban happens under an independent government in the presence of the international communities. If Taliban comes to Kabul and have a share of power, how our future as women will be any different from them?” 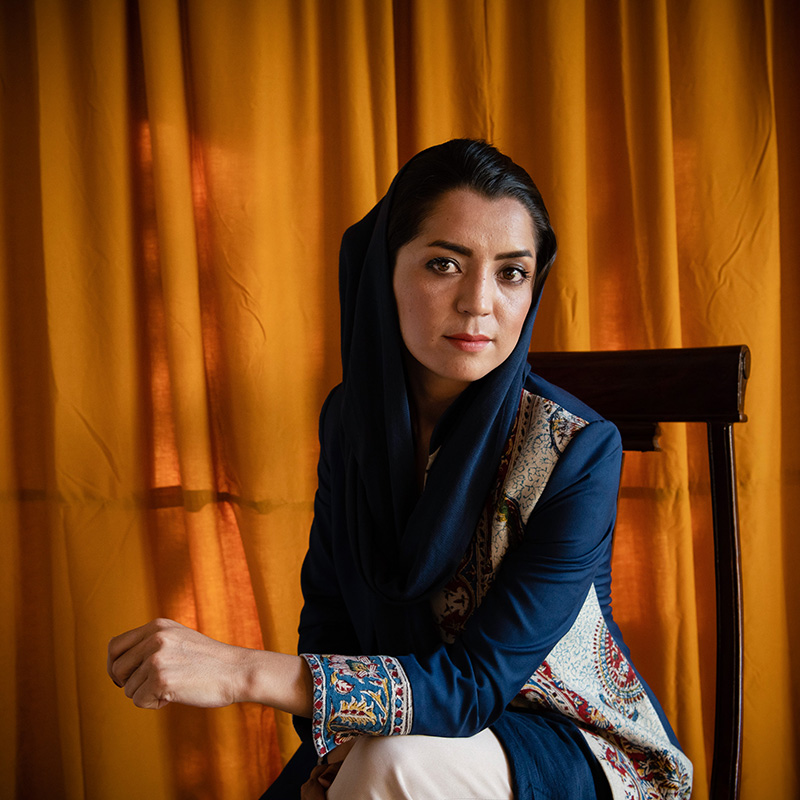 Masooma Hosseini, 26
Communication Officer at Book City Cultural Center
“The biggest loss for us would be the freedom we have gained in the past 18 years. For me specifically, I live alone, separate from my family, and I’m confident that if Taliban comes back, I will lose my independence, which I have gained with hard work, as incomplete as it may be.” 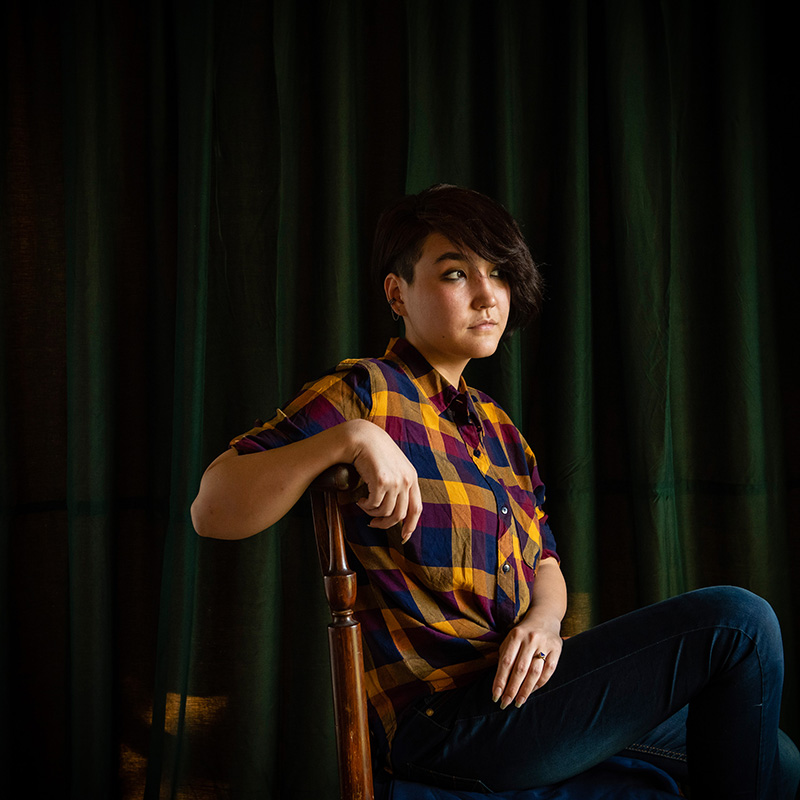 Muqaddessa Yourish, 27
Deputy Minister of Industry and Commerce
“I find peace and loss mutually opposed to each other. So escaping the ghosts of the past, I try not to entertain the idea of ‘loss’ for women in the peace process. In fact, given the broad spectrum of women’s interests, I aspire for Afghan women to push for and gain from the peace process an idea of citizen freedom that allows every rural and urban woman to pursue their individual conceptions of a good life, regardless of their geographic locations and social interests.” 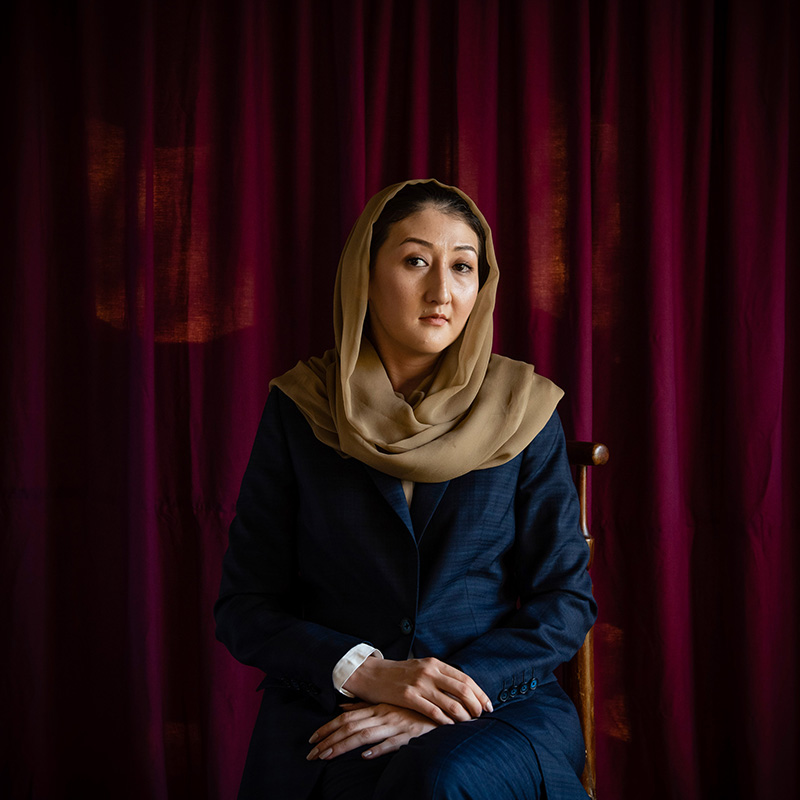 Zhala Sarmast, 19
Cyclist, Nobel Peace Prize Nominee, Student
“I define negotiation as a mutual partnership. Even if Taliban become a small part of the government, the government won’t sacrifice what we have or accept going back to where we were in ’90s.” 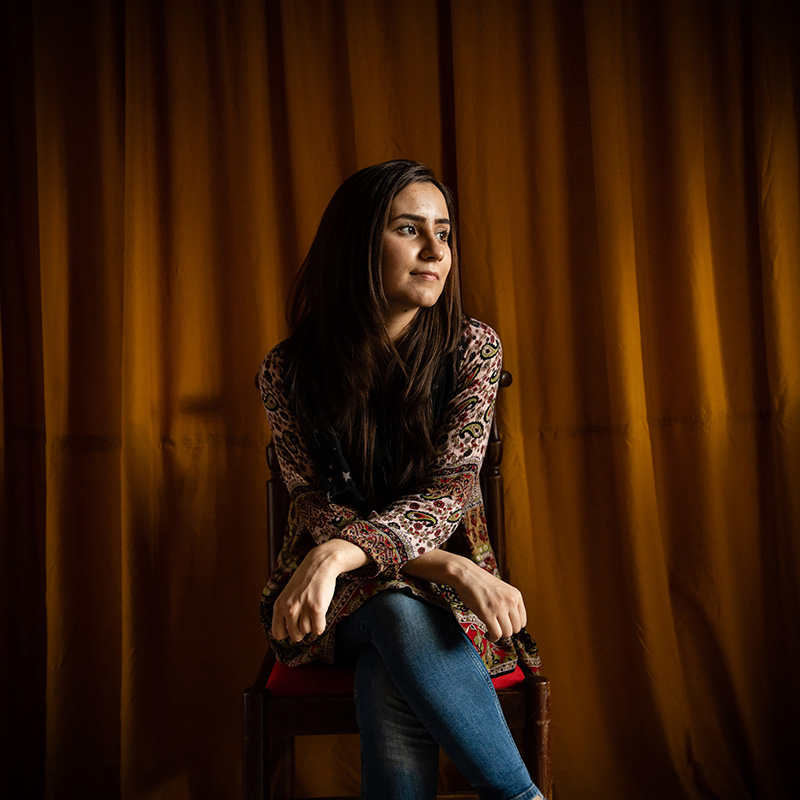 Shinkai Karokhail
Former Afghan Ambassador to Canada
“With the return of Taliban, I will face political turbulence, lots of ups and downs, but I won’t go back to my previous place.” 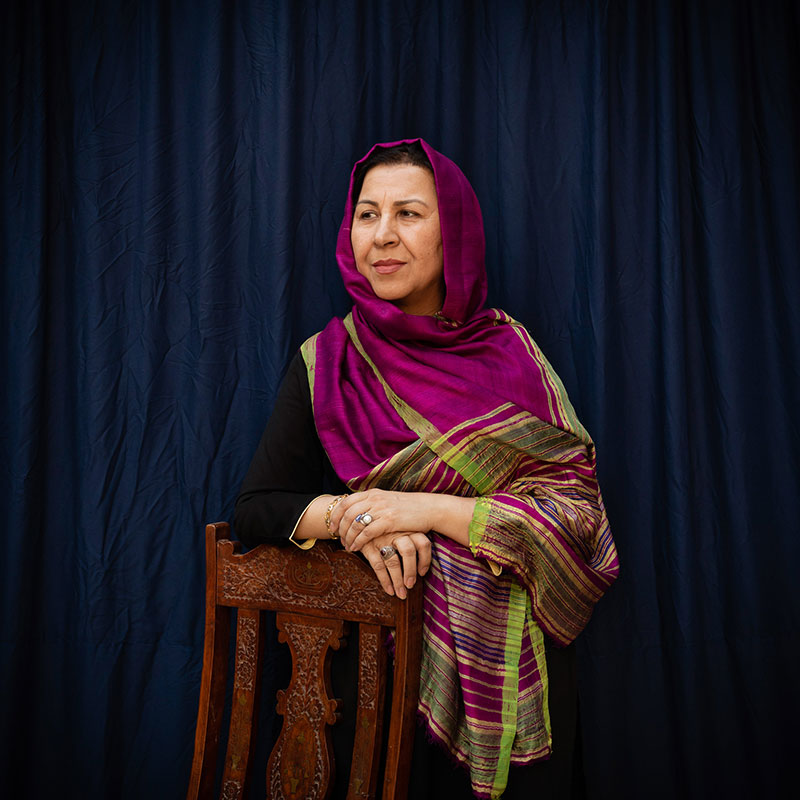 Arezoo Hosseini, 36
Beauty Aesthetician
“I was born and raised in Iran; only returned to [Afghanistan] seven years ago. If Taliban comes back, it will directly impact my work as a beauty aesthetician. Not only they’re against women working outside of home, but they’re also against makeup.” 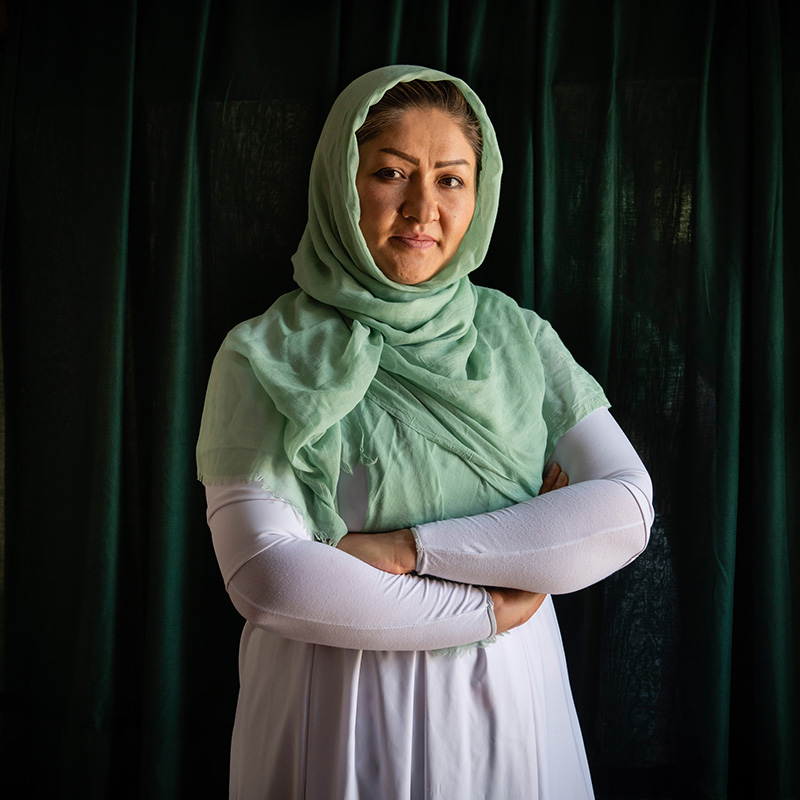 Zarlasht Sarmast, 23
Student
“We have given many sacrifices to get where we are now; we are not going to give all that up just like that. I am hopeful. Not afraid.” 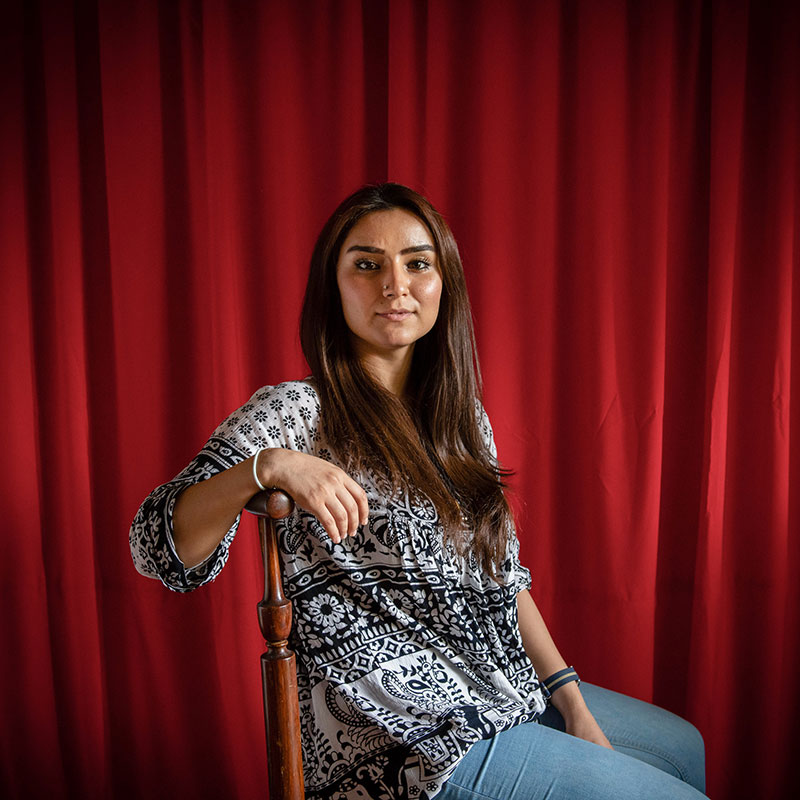 Homa Alizoy, 48
Judge
“The idea of peace is very idealistic. The experience has shown Taliban is very dogmatic when it comes to their ideologies and how they practice it. Women and children are the most vulnerable, and it will impact their education, work, and their status. I, as a female judge, will be sent home once again and won’t be able to practice, but I will continue my fight under burqa if I have to. It is impossible to know how the future will look like.” 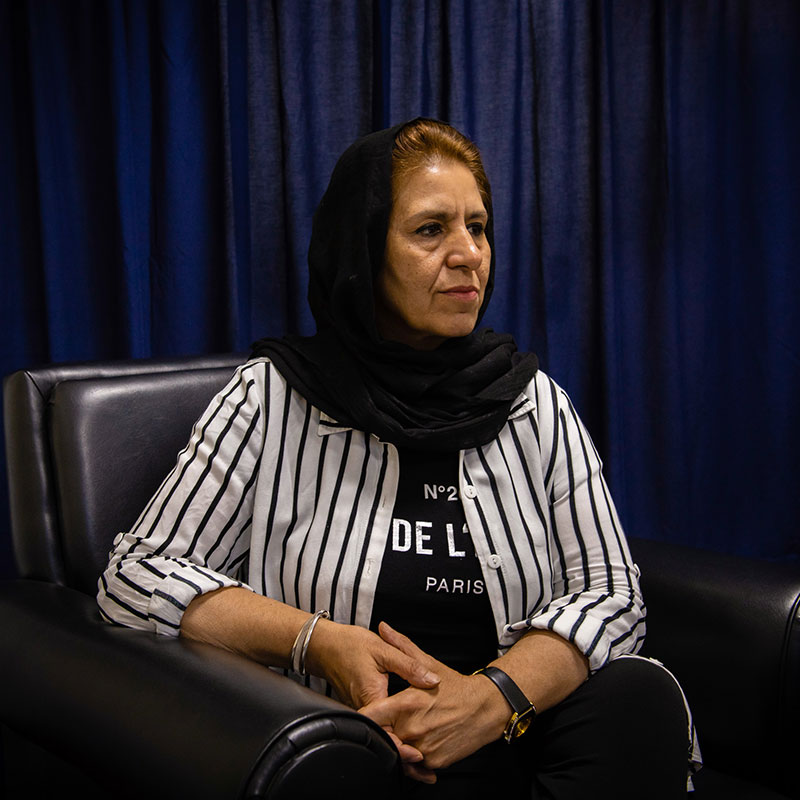 Fatemeh Ayreek, 28
Puppet-Maker and Actress
“If Taliban comes back, the first thing I will lose is my audience, who are the children of this country. I won’t be able to do the work I do today, theater for children. I didn’t have a happy childhood myself, didn’t even know what theater was until I was 14. That play remains one of the happiest memory I have from my childhood to this day.” 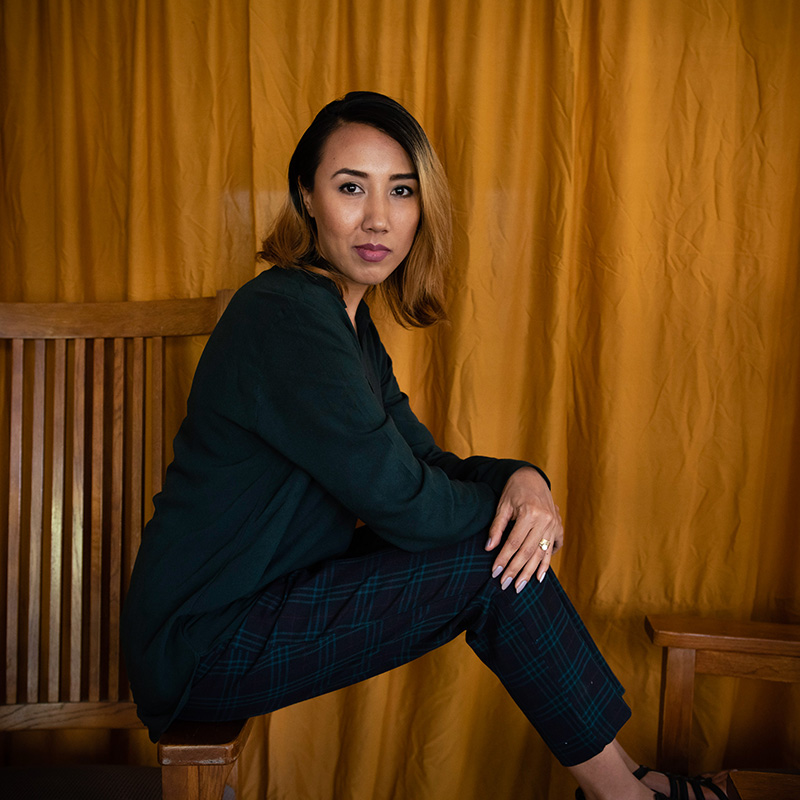 Salma Alkozai, 30
Director of Aid Management at the Ministry of Finance
“I’m not against peace nor negotiations, and there will be compromises that need to be made. However, I won’t allow my rights, as a woman and young Afghan, to be compromised in this process. We, the youth, have already sacrificed so much and worked so hard to have our country the way we have it now.” 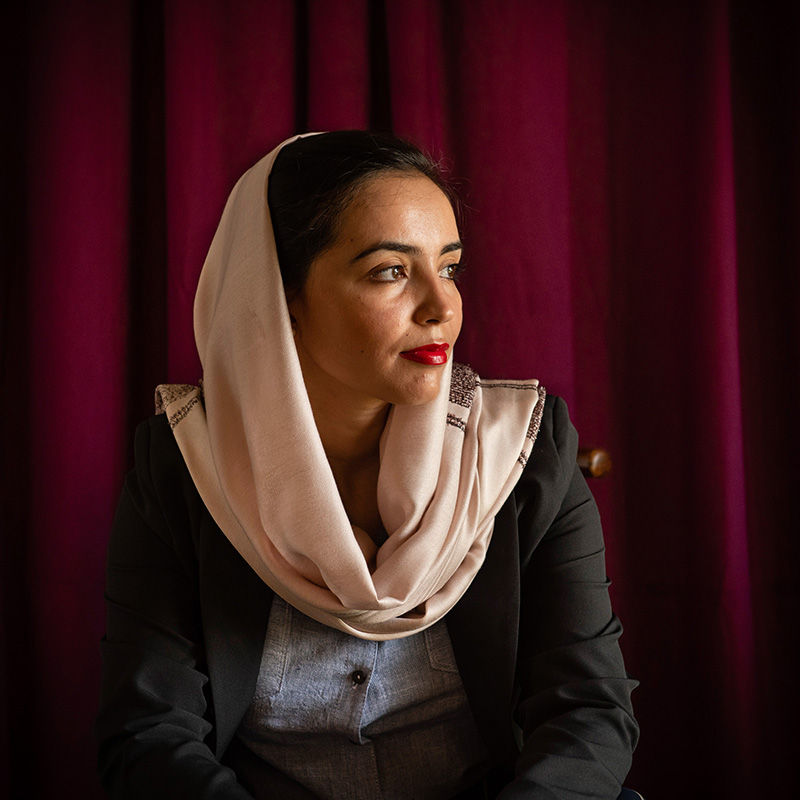 Fakhria Ibrahimi Mumtaz, 30
Yoga Instructor
“Even after the invasion, I never truly felt that Taliban left. Some of them remained and lived among us in this society. Look at Farkhunda’s death, stoning of women, and hundreds of other examples out of provinces and districts. I think if peace negotiations bring Taliban back, in any shape or form, it will only give platform to those with the same mentality to continue oppressing Afghan women.” 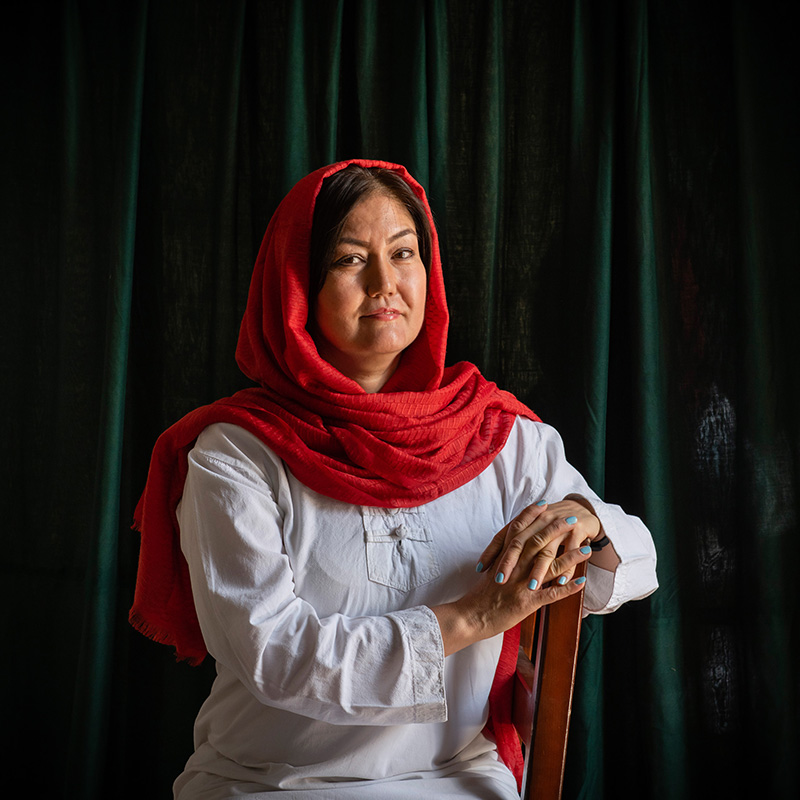 Masooma Hosseini, 32
Project Assistant at the International Organization for Migration
“Hope for a better future would be the biggest loss. We still haven’t experienced stability, but at least we are hoping and working towards it. Hope for a more stable country is all we have.” 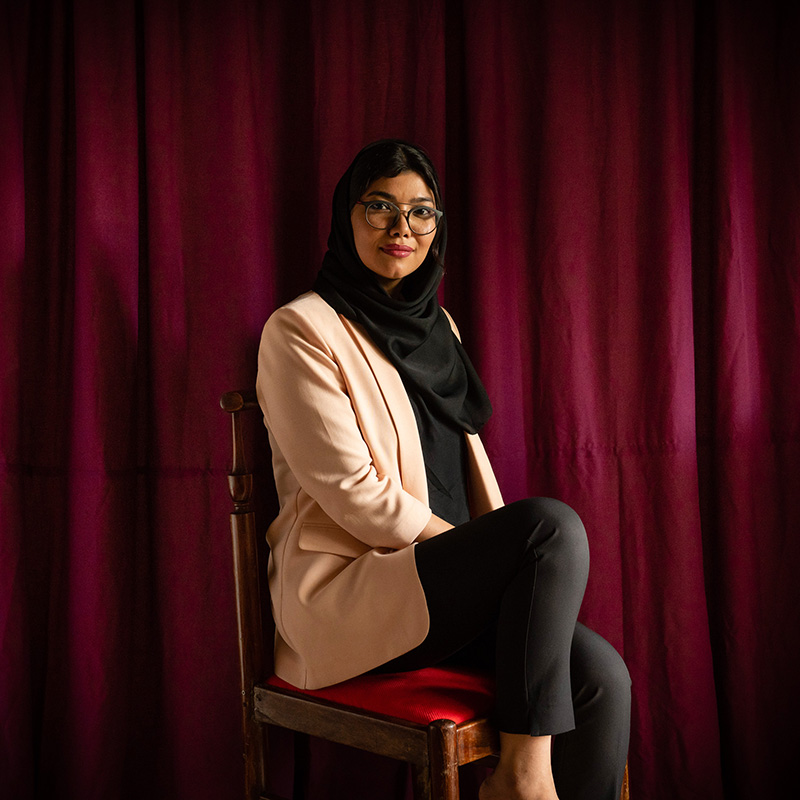 Sakina, 37
Cleaner and Single Mother
“I won’t be able to work if Taliban come back into power. How am I going to provide for my four children and send them to school?” 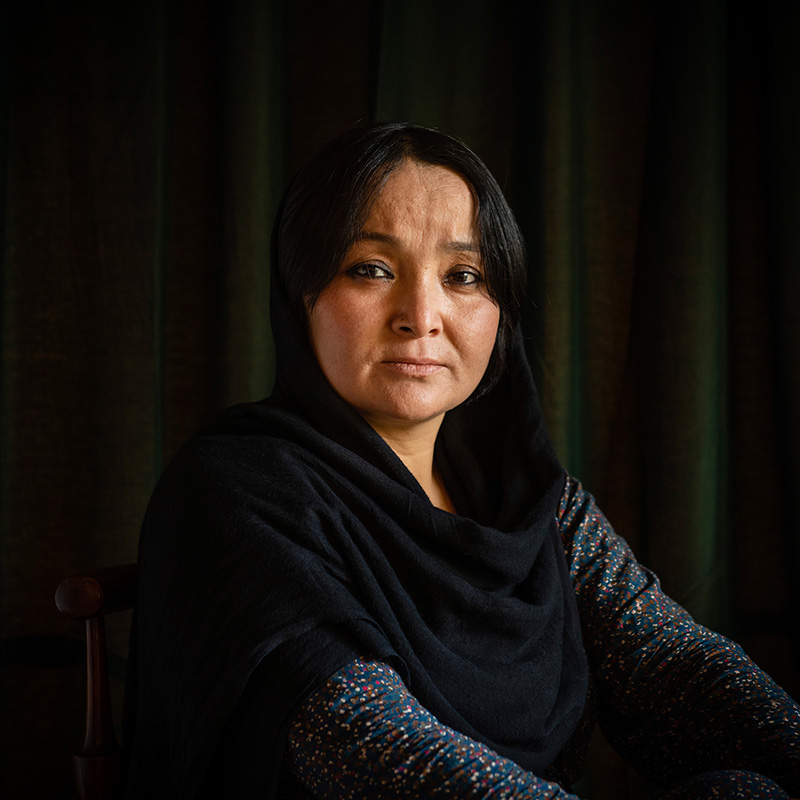