Some of President Donald Trump’s closest aides and family members have interacted with people who have confirmed COVID-19 cases.

By
by Zahra Hirji

and
by Katie J.M. Baker

A growing number of people in President Donald Trump’s orbit have been in contact with someone known to be infected with COVID-19, the disease caused by the novel coronavirus — with a few testing positive themselves.

BuzzFeed News has mapped these connections using social media and news articles. It’s by no means comprehensive. What it shows is how fast the virus has spread among people in Trump’s orbit in approximately two weeks of the US outbreak. Close aides and family members have come in contact with people who are confirmed to have the virus.

This group includes a Brazilian official who tested positive for the virus after meeting Trump and his family at Mar-a-Lago in Florida over the weekend; Australia's Home Affairs minister, Peter Dutton, who tested positive and was admitted to the hospital days after a meeting in Washington, DC, with the president’s daughter Ivanka Trump, Attorney General Bill Barr, and other White House officials; and an anonymous male who tested positive after attendinng the Conservative Political Action Conference’s annual meeting, where Trump and a number of other prominent Republicans were present, some of whom directly interacted with him.

After declaring the outbreak a national state of emergency on Friday, Trump said he might get tested but would not self-isolate. He then proceeded to shake many people’s hands, which health officials have recommended against to prevent possibly spreading the virus. Trump has previously said he has had little to no contact with any infected individuals, despite at least one photo of him standing directly next to a known infected person. Later Friday evening, Trump's physician released a letter acknowledging a previously unknown exposure of the president, but declined to have him self-isolate or be tested. Then, in a surprise announcement at a press conference on Saturday, Trump announced that he’d taken a test and was awaiting results.

Others in the administration and Republicans in Congress have not been taking their cues from the president, however; they have chosen to seek advice from the CDC, self-isolate, and even get tested after learning about possible exposures.

BuzzFeed News has reached out to all US officials listed here. Except where indicated, they did not respond to a request for comment.

The Conservative Political Action Conference’s annual meeting, which bills itself as the largest gathering of grassroots conservatives on the planet, took place Feb. 26–29 in Maryland. Trump spoke on Saturday. The guest who tested positive for COVID-19 has not been named, but it seems he came in contact or suspected contact with many of CPAC’s high-profile attendees. Matt Schlapp, the chair of the American Conservative Union, said he shook hands with him and later shook hands with Trump and Vice President Mike Pence, among others. Several Republican members of Congress consulted with medical professionals, got tested for the virus, or chose to self-quarantine following news of their possible exposure at the event. 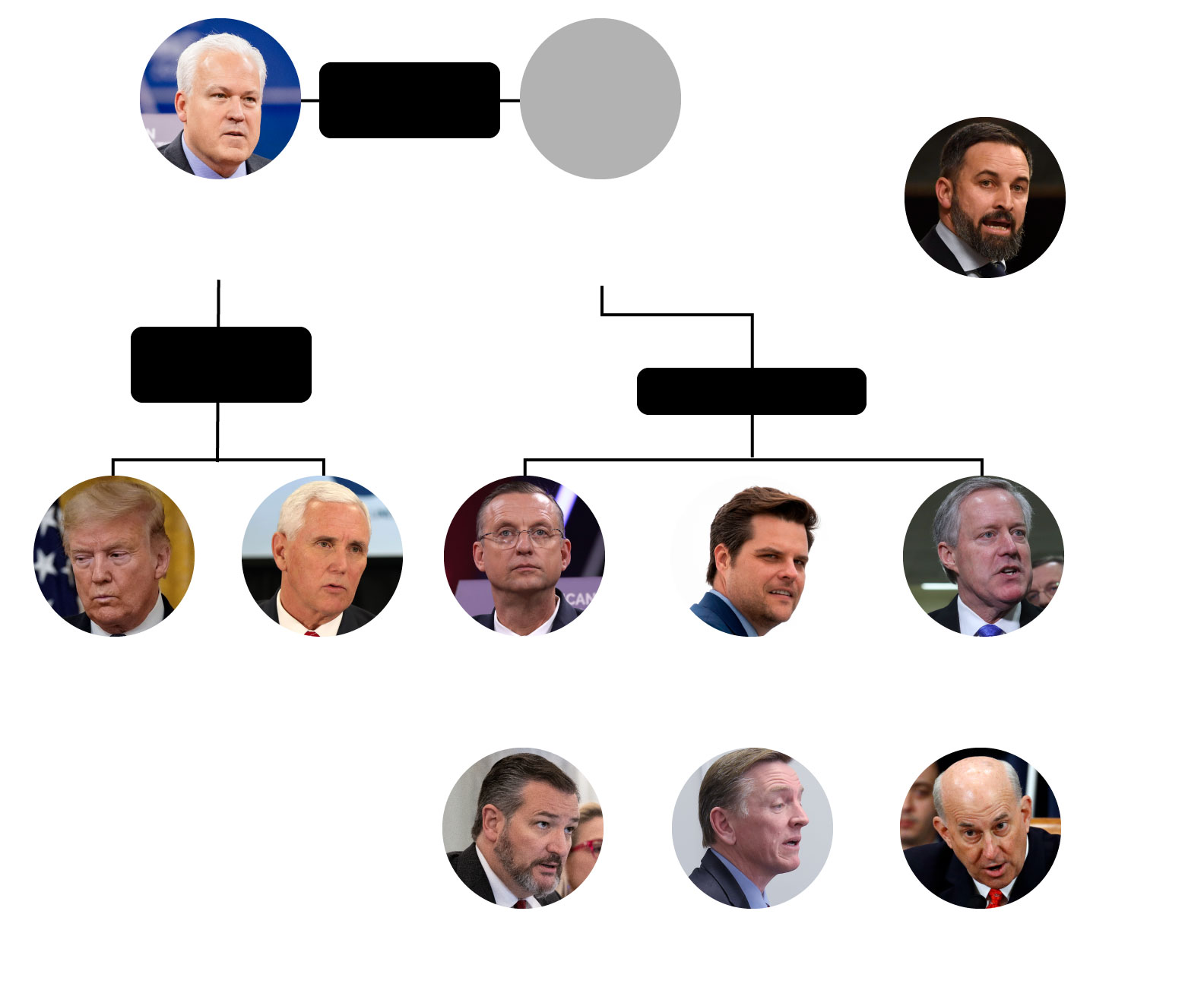 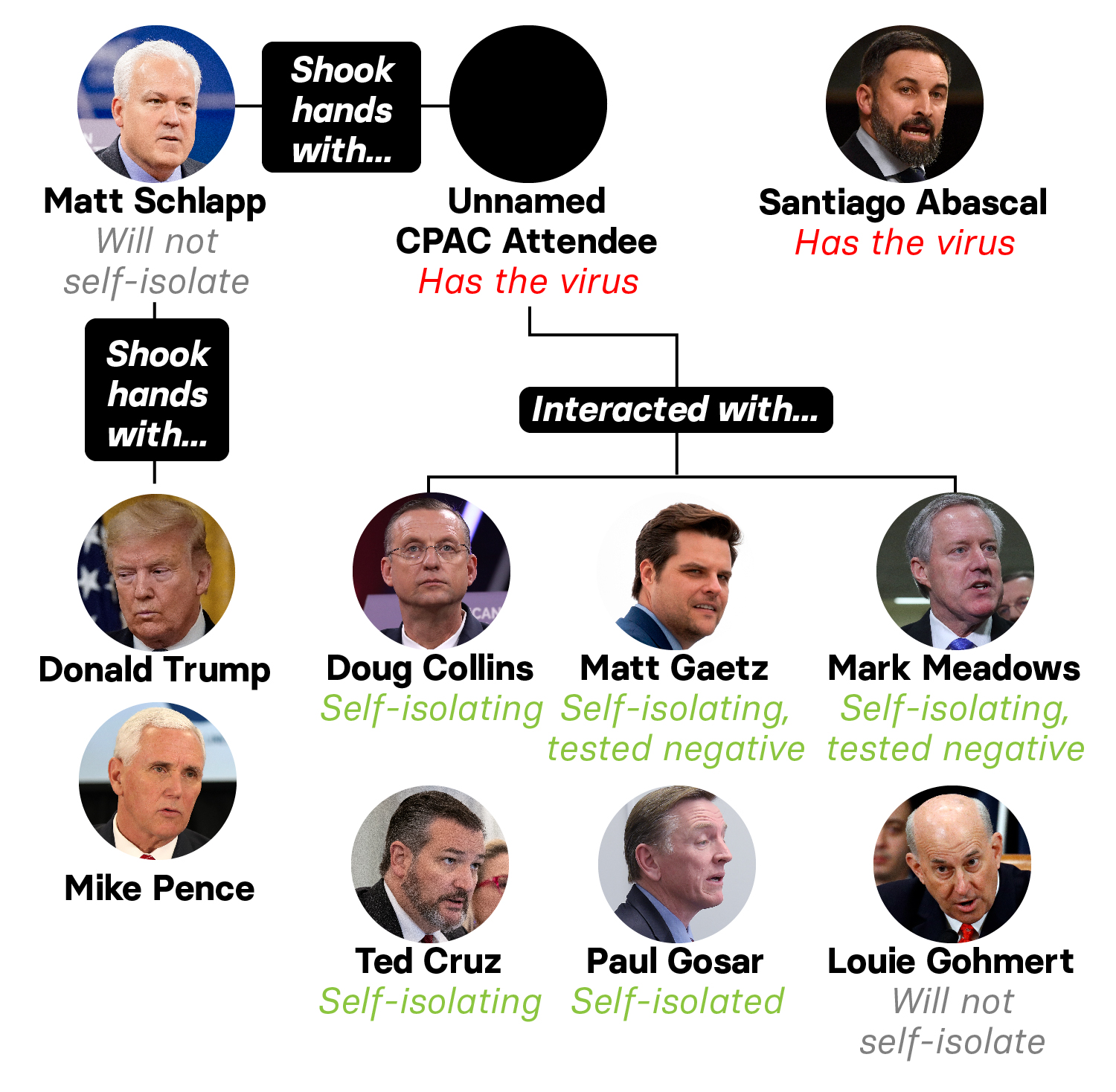 Australia's home affairs minister, Peter Dutton, said on March 13 that he tested positive for the coronavirus, less than a week after meeting at the White House with Attorney General Bill Barr and senior White House adviser Ivanka Trump. It is unknown if Ivanka has been tested or quarantined. Barr stayed home on Friday and will not be getting tested after consulting with the CDC, a Department of Justice spokesperson told BuzzFeed News in an email.

Dutton had also met with Kellyanne Conway, counselor to the president, and Joe Grogan, director of the Domestic Policy Council, during his trip to the US in early March. It is unknown whether Conway or Grogan were tested. South Carolina Sen. Lindsey Graham also met with Dutton and has announced he’s self-quarantining and awaiting test results.

Reps. Doug Collins and Mark Meadows, who were exposed to the infected individual at CPAC, later met at the White House with Trump. Only after the White House visit did they learn of their exposure; both chose to self-quarantine. Meadows tested negative. 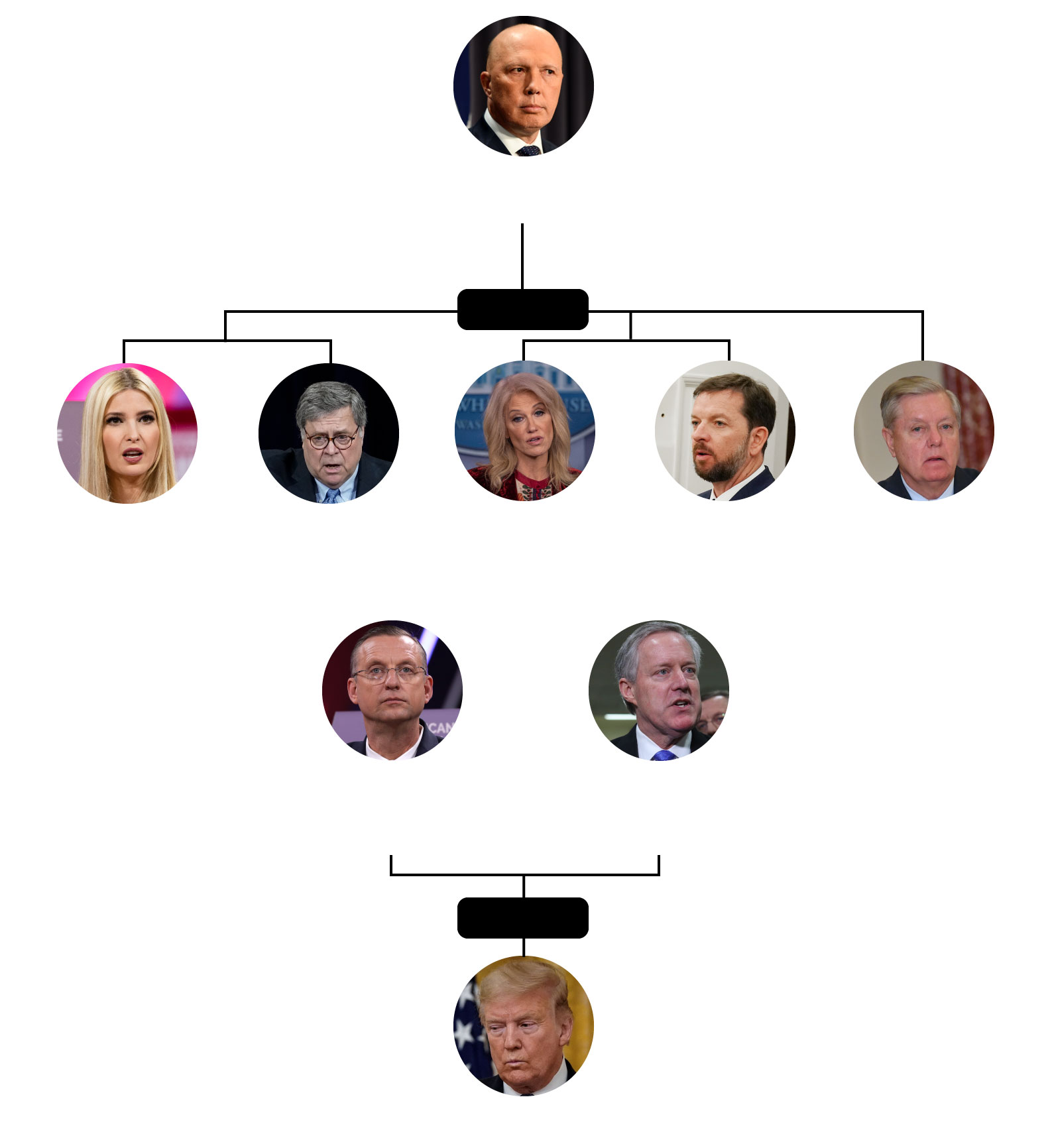 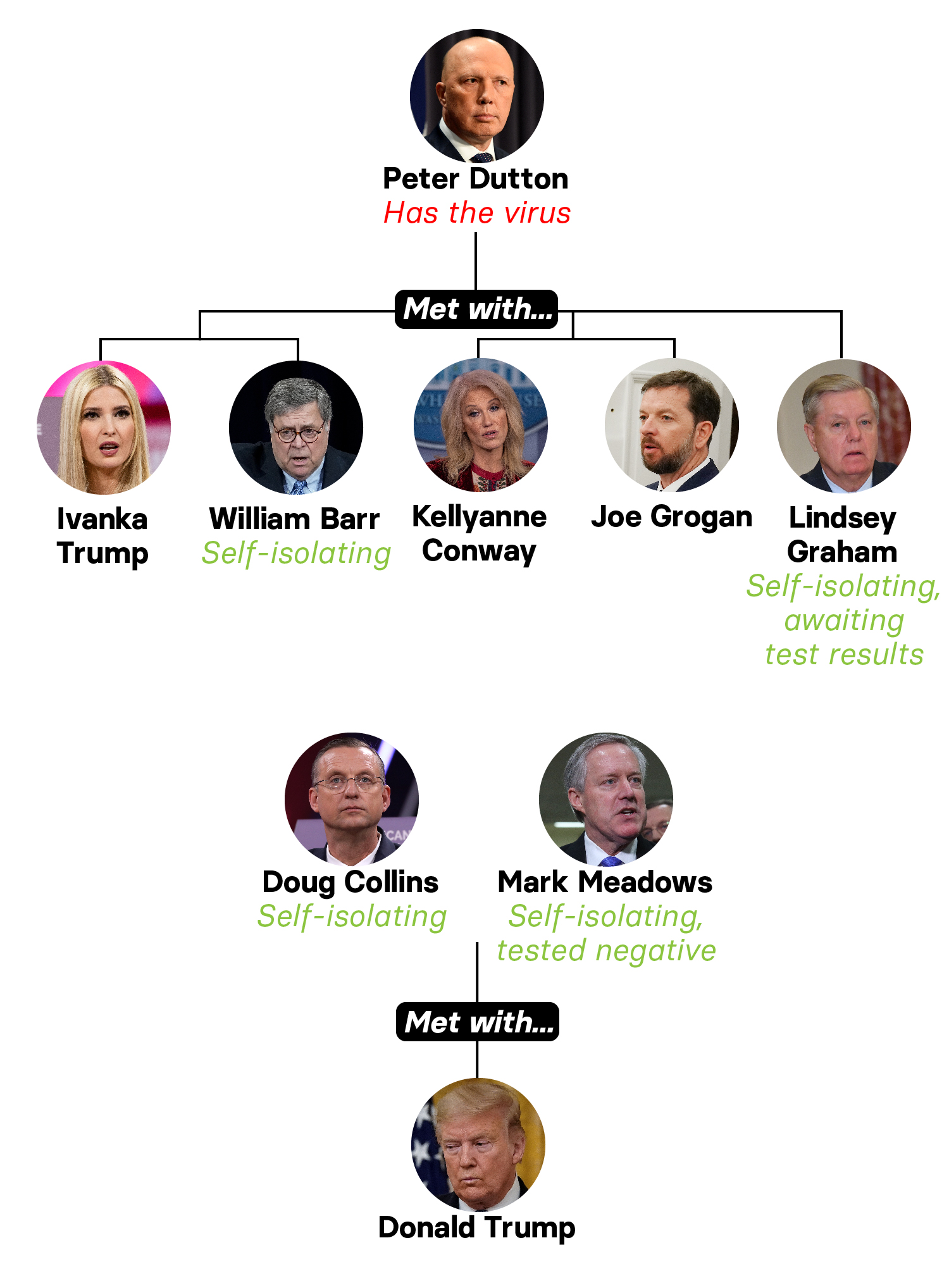 Other politicians who came into contact with the Brazilian delegation in Florida — Sens. Rick Scott of Florida and Lindsey Graham of South Carolina — said they weren’t experiencing any symptoms but chose to self-isolate anyway. “His doctors still believe that he is at a low risk and getting tested is unnecessary as long as he’s not experiencing symptoms. But we’re constantly reevaluating the situation,” a spokesperson for Scott told BuzzFeed News in an email. Meanwhile, Graham’s office confirmed he’s awaiting test results.

Miami-Dade Mayor Carlos Giménez and Miami Mayor Francis Suarez both said they were self-isolating after being near or coming into contact this week with Wajngarten and Bolsonaro. On Friday, Giménez and Suarez said they both tested positive for the coronavirus.

“I feel completely healthy and strong,” Suarez said in a statement sent to BuzzFeed News on Friday. “However, I am doing the responsible thing by working with the County’s Health Department to take every precaution to ensure that not only my family is healthy, but everyone I have come in contact with is healthy as well.”

Another person that attended a Sunday luncheon at Mar-a-Lago has since tested positive, according to the Washington Post on Friday. Trump gave remarks at the event, but it’s unknown if he came into direct contact with the infected person, whose identity has not been revealed. On Friday evening, Trump's doctor acknowledged the president had been exposed to yet another infected person in Florida, another member of the Brazilian delegation. 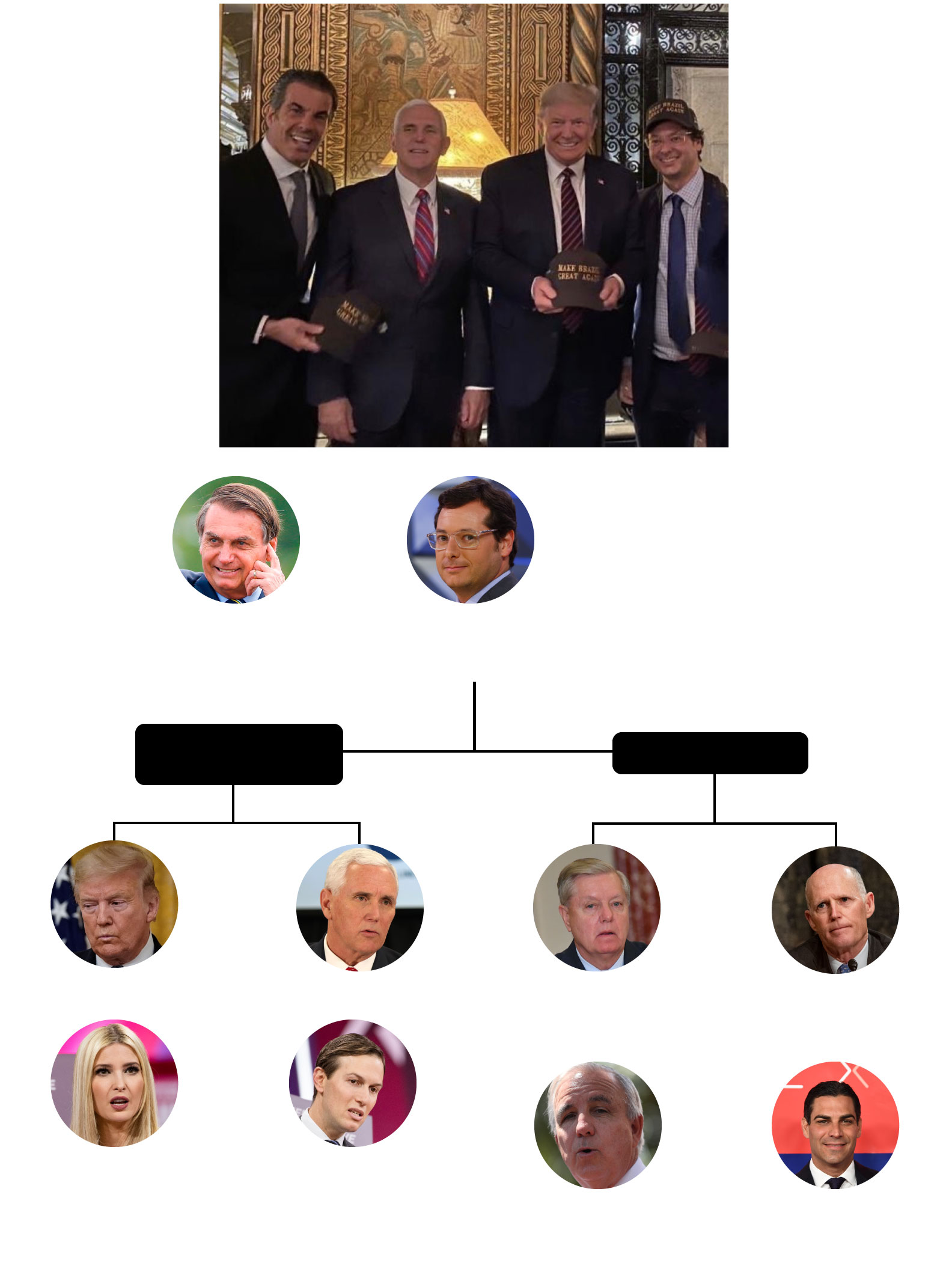 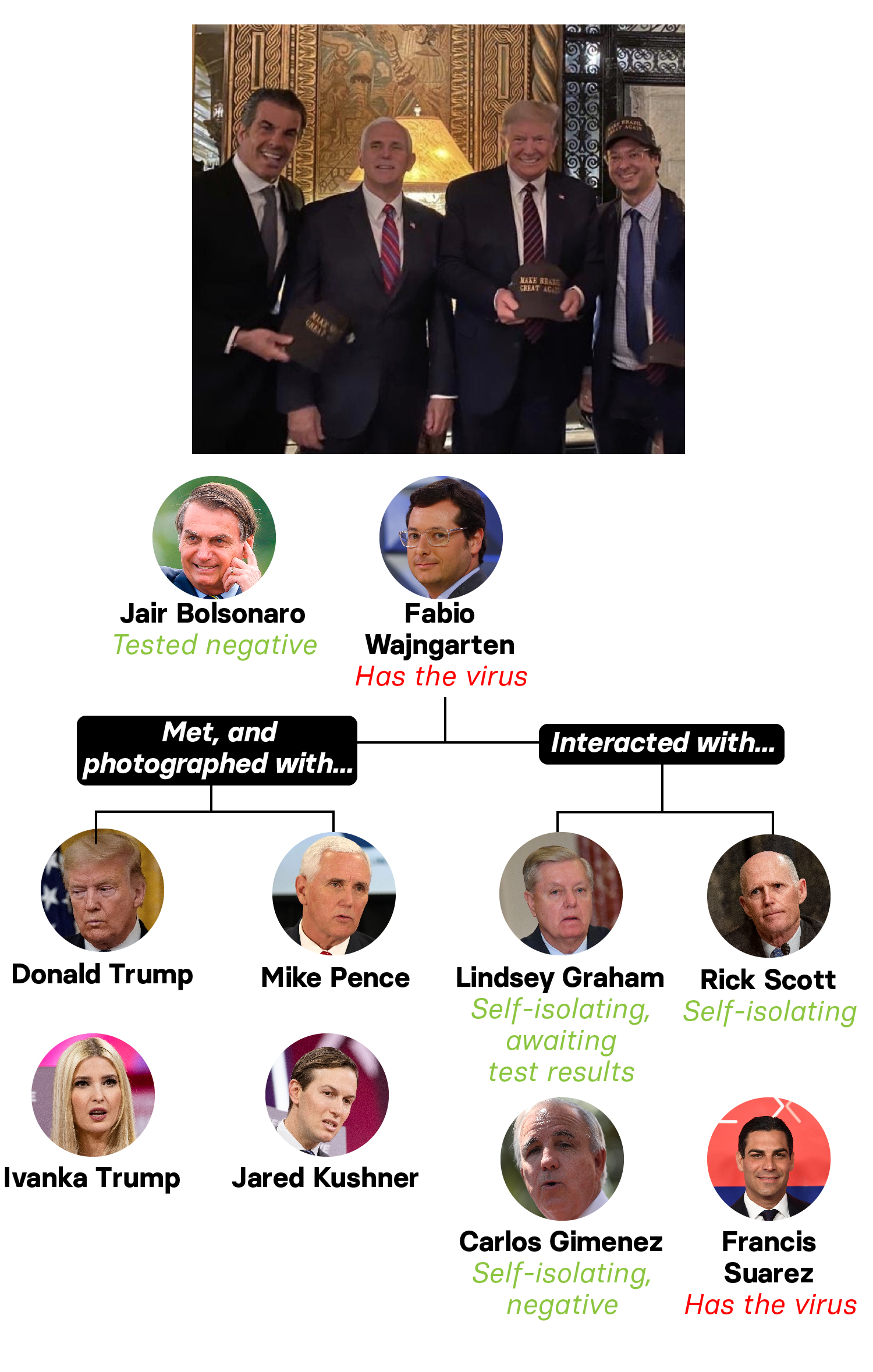 This story has been updated to include Trump's Saturday announcement that he has been tested for the virus.

This story has been updated to include comments from Trump's physician shared on Friday evening.

This story has been updated to include the fact that Miami-Dade Mayor Carlos Giménez has tested negative for the coronavirus.

Trump hosted the Brazilian delegation in Florida on the weekend of March 7. An earlier version misstated the date.