The coronavirus epidemic in the US is concentrated in regional hot spots. Follow the latest data on COVID-19 deaths in cities across the country.

Every US state has been hit by COVID-19. But numbers at the state level obscure the emerging story of the epidemic: So far, the worst outbreaks have happened in major urban centers, concentrated in hot spots like New York City, New Orleans, and Detroit.

The charts and maps below focus on the death toll in cities and their neighboring regions throughout the nation. In the chaos and confusion of a worsening epidemic, some deaths from COVID-19 may not have been accurately recorded. Where available, the data includes “probable” COVID-19 deaths — based on symptoms and exposure to the virus, without a positive test result. These charts and maps will be updated daily.

How hard has your nearest city been hit? 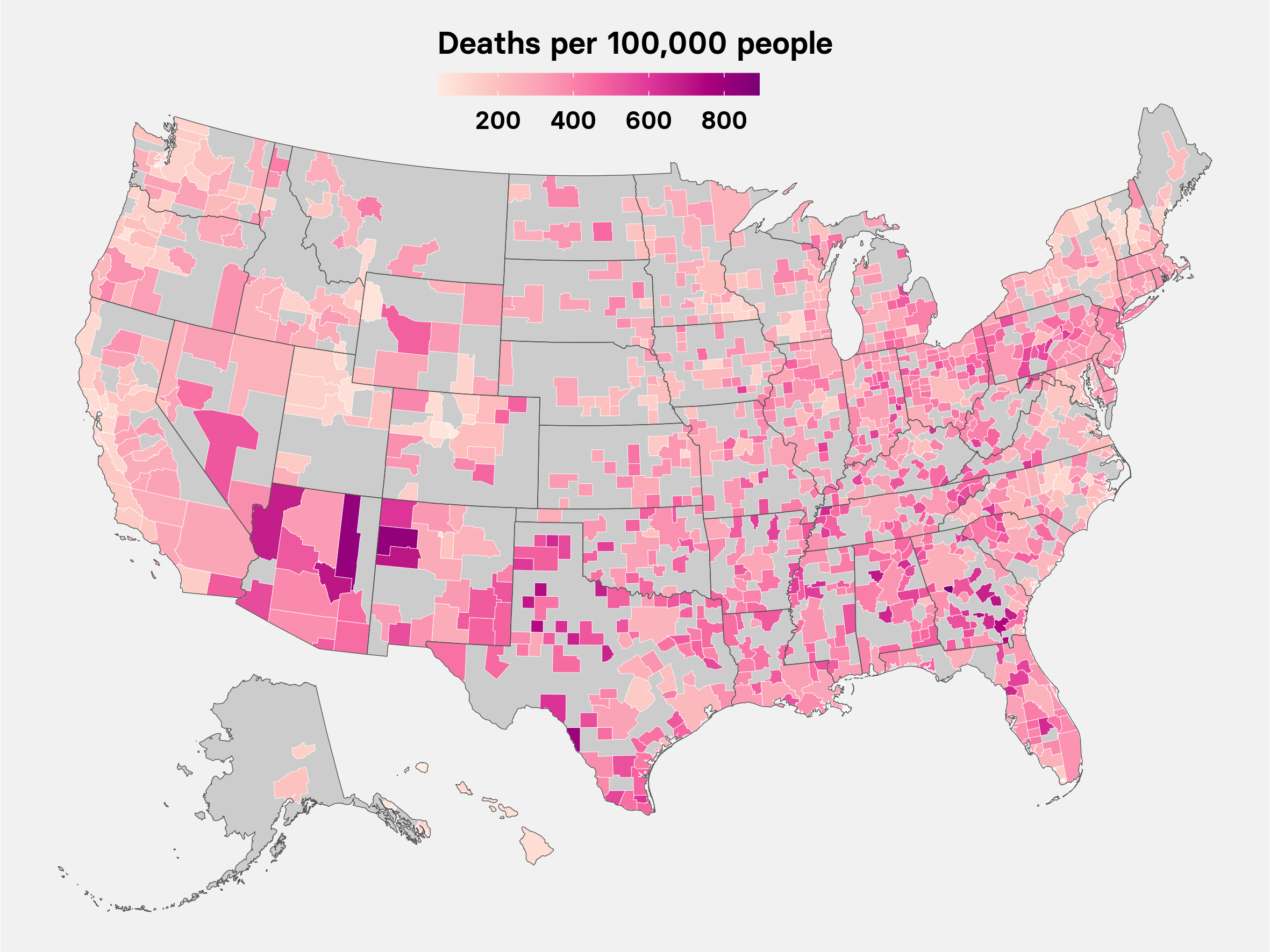 The most consistent local data on deaths from COVID-19 is being collected at the level of individual counties, rather than cities. So to map the toll across urban America, we analyzed “core-based statistical areas,” which consist of a county or combination of counties containing a city with at least 10,000 people, using data compiled by the New York Times.

Some of these areas contain millions of people and cross state lines: For example, the wider New York metro area, with a population of more than 19 million, includes Newark, New Jersey, and Pike County, Pennsylvania. Others occupy a huge physical area, such as Flagstaff and the rest of Coconino County in northern Arizona.

On the map above, rural areas with a very low population density and no significant cities are colored gray. The rest of the map shows urban areas and their surrounding counties — what you can think of as “urban-connected” America. Areas filled in white have not yet recorded a death from COVID-19, while those that have recorded deaths are colored according to the number of deaths per 100,000 people.

To more clearly show where the coronavirus has hit hardest, the second map below has been filtered to show the 50 areas with the highest death rates and a total population of at least 100,000 residents. This filters out smaller cities with a relatively low number of deaths, and reveals regional hot spots. 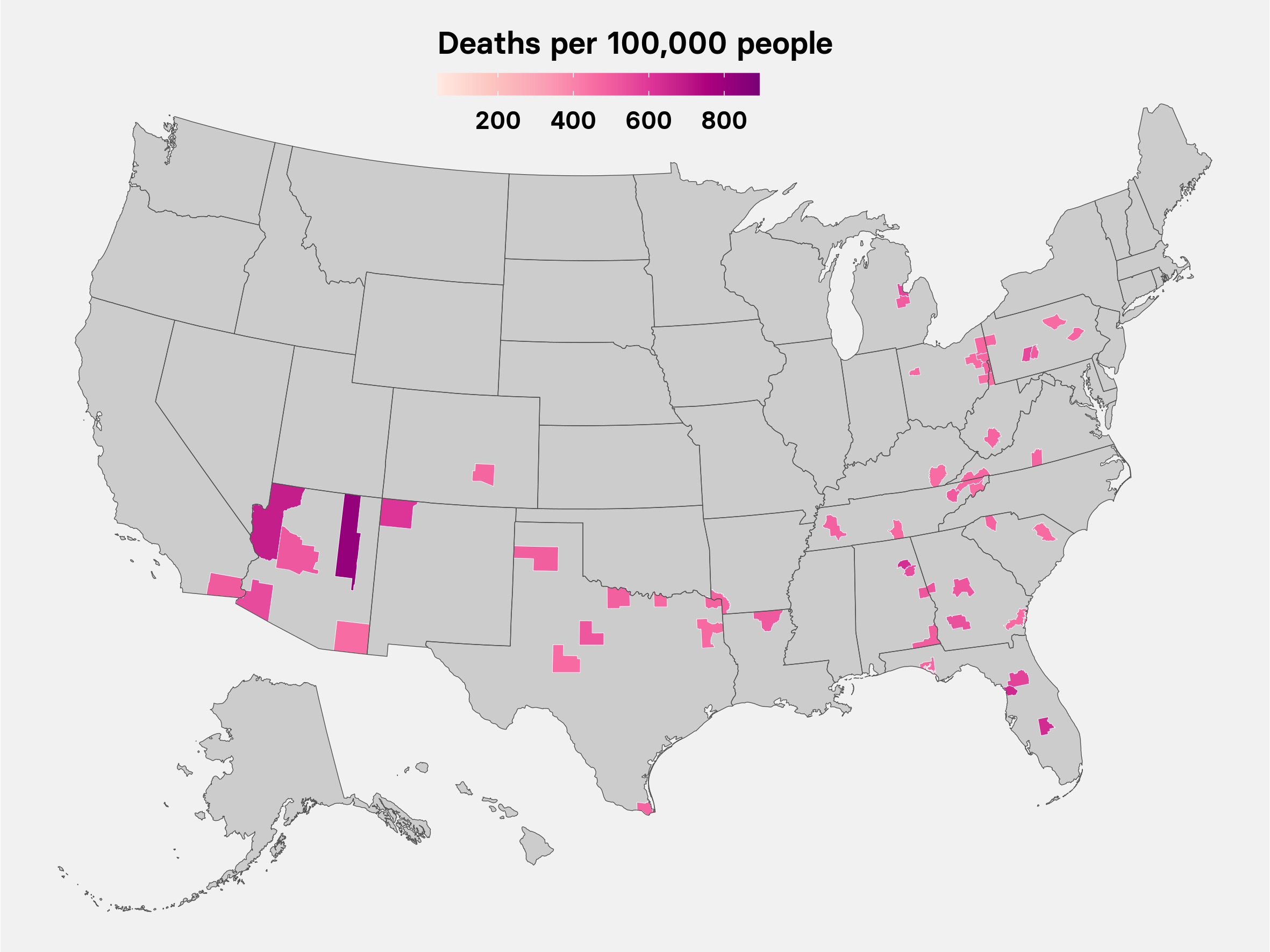 Measured by the sheer number of deaths, the outbreak in the New York City metro area is by far the worst in the nation. Neighboring areas have also been hit hard.

Measured by deaths per 100,000 people, Detroit and New Orleans have also been badly affected. As a hub for tourists from across the world, who packed into the city’s bars and restaurants as the virus began to spread, New Orleans was vulnerable to becoming an early hot spot. Both cities also have a high proportion of residents with diabetes, obesity, and other conditions that increase the risk of death from COVID-19.

Albany, Georgia, has one of the highest death rates in the nation. The city and its surrounding rural area has fewer than 150,000 residents, but by April 3 more than 40 had died from COVID-19. Health officials have traced this intense outbreak, which disproportionately hit the local black community, to a funeral in late February, attended by someone who was unknowingly carrying the virus.

Search the data for your nearest city

This chart shows total deaths, deaths by 100,000 people, and population for all of the cities in the data. Search for the city nearest you by typing in the box at the top left, or sort the data by clicking on each of the column headers; click once to sort in ascending order, or twice to sort in descending order.

Total death rate over time for the hardest-hit cities 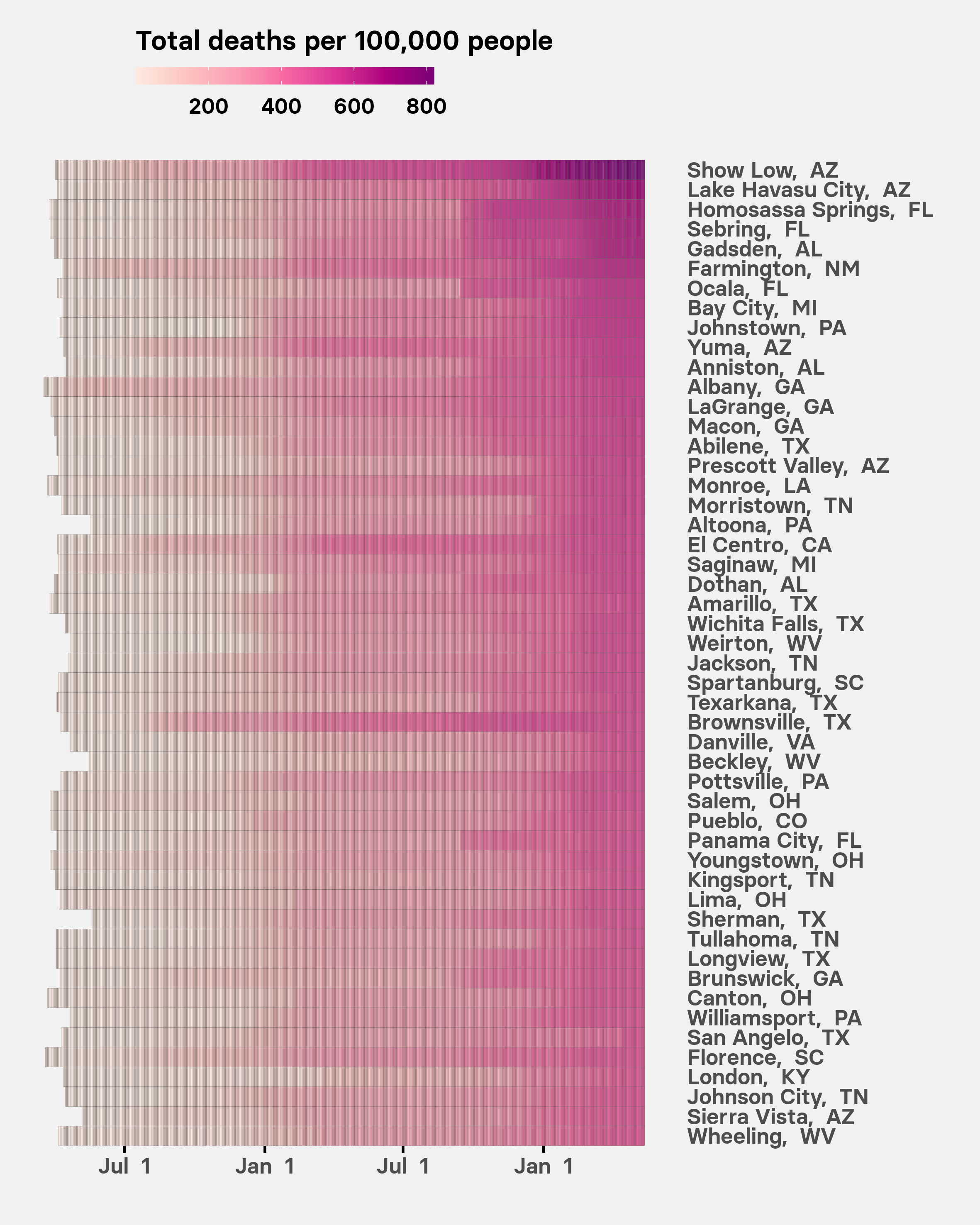 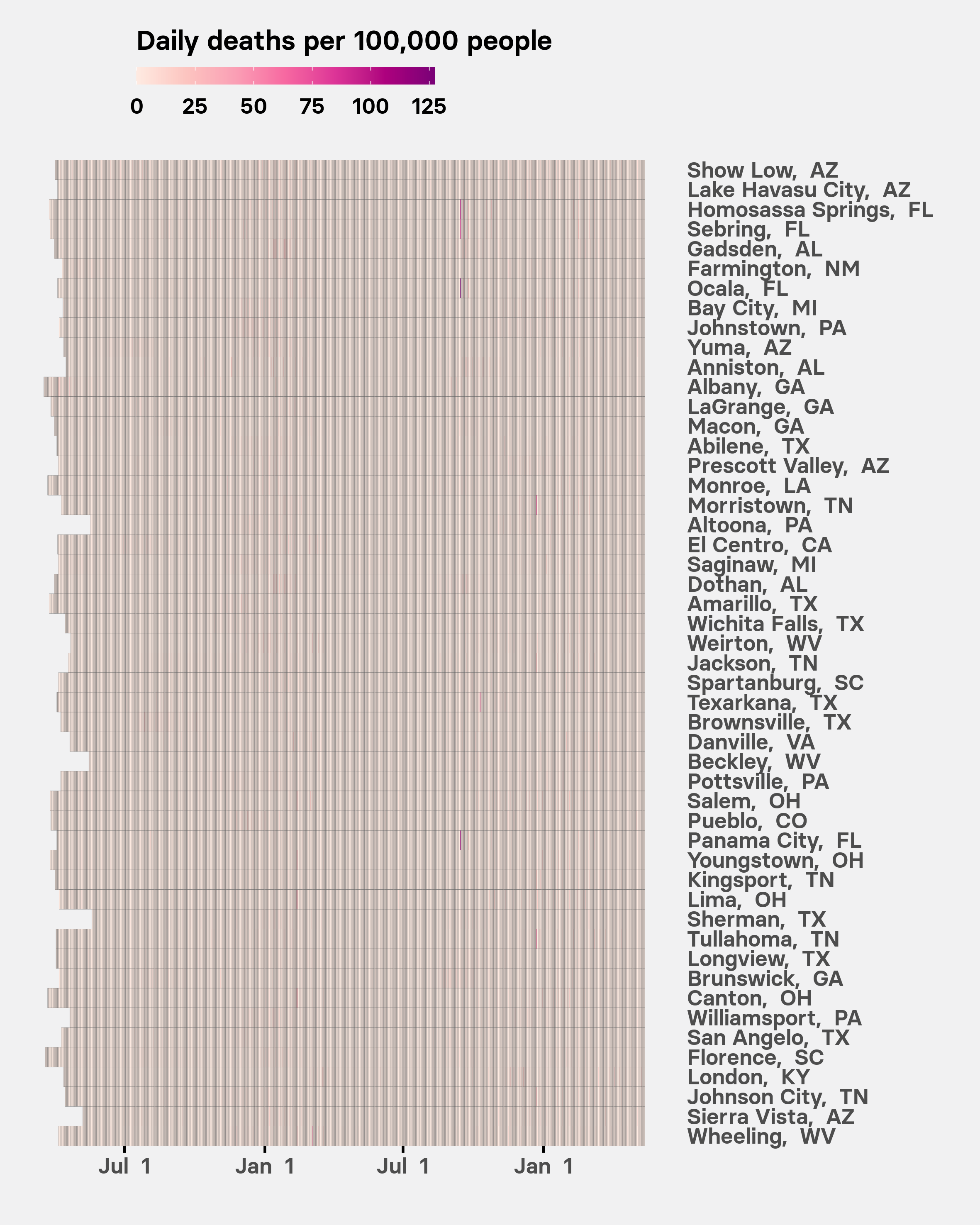 This chart shows the number of reported deaths, relative to the cities’ populations, on each individual day. If the tiles for any city start to get lighter over time after a period with more intense colors, it suggests that its epidemic is starting to come under control. (Outbreaks may flare up again, however, if social distancing measures are relaxed.)

How fast have the death tolls been rising in the largest and hardest-hit cities?

Death rates reveal proportionately how hard individual cities have been hit by COVID-19, but it’s also important to consider the totals, and how quickly they are rising. 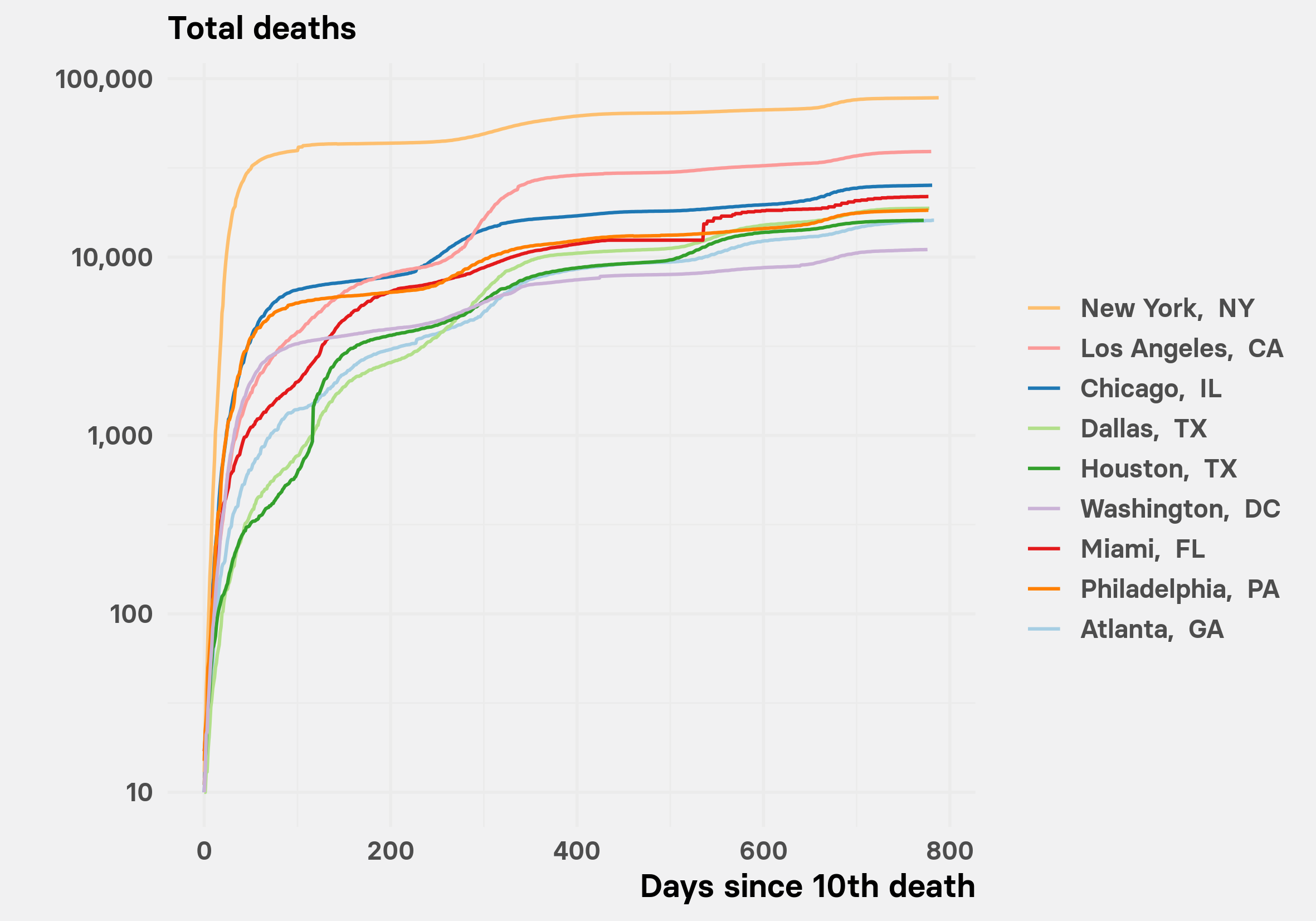 The chart above shows the number of deaths in the nine metro areas in the US with a population of more than 5 million, on a logarithmic scale. This makes the difference between 10 and 100 take up the same height on the chart as the difference between 100 and 1,000. It turns the rising curves of rapidly growing outbreaks into straighter lines — making it easier to compare their trajectories. 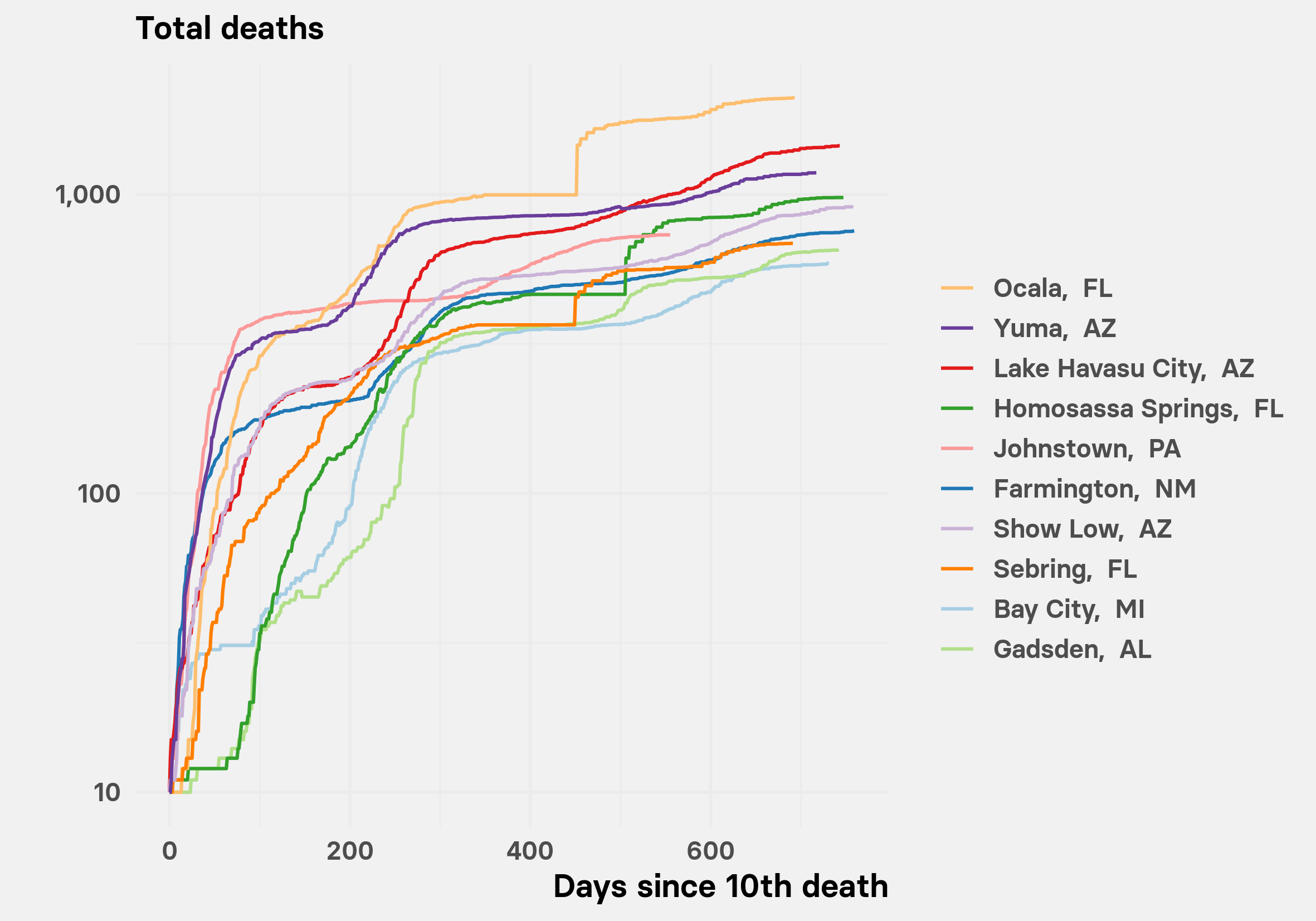 This chart shows the same view, but for the 10 cities with the highest death rates and a population of more than 100,000.

You can also use this COVID-19 tracker to track the US epidemic, as well as progress with testing, at the state level.

As of April 4, Wyoming had recorded no deaths due to COVID-19. A previous version of this story incorrectly suggested that every state in the US had recorded a death by this date.