The coronavirus outbreak has prompted an unprecedented surge in gun sales, exceeding a previous record set after the Sandy Hook mass shooting. 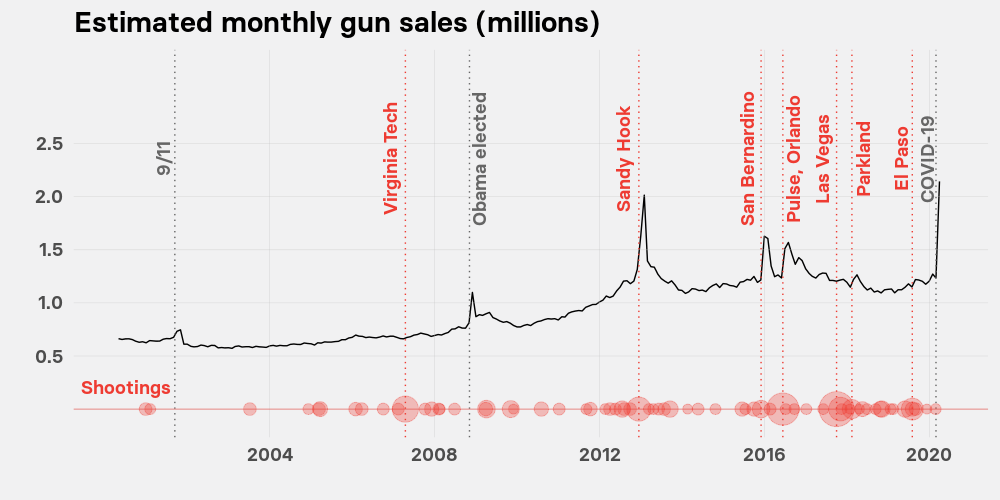 This chart shows the spike in US gun sales that took place in March, as fear of COVID-19 took hold. The massive spike blows past previous surges in sales set after mass shootings, most prominently after Sandy Hook.

BuzzFeed News estimated gun sales from the FBI’s monthly figures on background checks for gun buyers, using a method developed by Jurgen Brauer of the consultancy Small Arms Analytics & Forecasting. Gun sales are highly seasonal, typically peaking in December, but we removed seasonal trends using a correction method from the US Census Bureau. This reveals any transient spikes that are not part of the seasonal pattern.

The spike for March 2020 is unprecedented. The dotted line labeled COVID-19 marks Feb. 29, when the first death from the disease in the US, a male health worker in his fifties from Washington state, was recorded.

In the first half of March, retailers told BuzzFeed News that they were experiencing a surge in gun sales, body armor, and other tactical gear driven by a desire by “preppers” to keep themselves safe in the face of uncertainty. “I think with the way things have escalated quite quickly around the world and in the US in just the last couple of weeks, it's very hard to tell what's going to happen next,” said Kevin Lim, owner of the tactical gear retailer Bulletproof Zone.

“It’s essentially what we anticipated,” Brauer told BuzzFeed News of the spike now revealed in the FBI data.

Over the years, the largest spikes in gun sales have come in the aftermath of high-profile mass shootings, when political debate turned to new gun controls. (Mass shootings, in which four or more people died, are shown as red circles on the chart, sized by the number of people killed. This data was compiled by Mother Jones.) Similar spikes have been seen in several states before new gun controls came into effect.

There was also a spike after Barack Obama won the 2008 presidential election, apparently because potential gun buyers realized the nation would soon have a president unlikely to veto any attempt by Congress to enact new gun controls. (At a fundraiser during the Democratic primaries, Obama had alienated gun owners by saying that small-town voters “cling to guns or religion.”)

After Donald Trump took office, backed by the gun lobby, massacres like those in Las Vegas in October 2017 and El Paso, Texas, in August 2019 didn’t have the same effect. Even the mass shooting at Marjory Stoneman Douglas High School in Parkland, Florida, in February 2018 triggered only a small bump in sales.

The only precedent in recent decades for the wave of fear currently gripping the nation was the reaction to the terrorist attacks of 9/11. Those attacks were also followed by a surge in gun sales, but nothing like the spike seen in March 2020.