By
by Paige Skinner

and
by James Sprankle

and
by Kate Bubacz

PHILADELPHIA — As Gabriela de Hoyos is transporting a gunshot victim on a stretcher back to the trauma bay, she tells the victim that they are going to live and everything will be OK. She tells them this no matter what.

“No one wants their last thought on Earth to be, I’m not going to make it,” de Hoyos, who worked as a trauma nurse at Penn Presbyterian Medical Center from 2016 to 2021, told BuzzFeed News.

De Hoyos is just one of the 100-plus people a gunshot victim may see from the time they are shot until they are fully recovered — part of the vast but largely hidden economic and psychological cost of gun violence. A single bullet wound sets in motion a long, labor-intensive process to try to save a life, a chain of support that includes police officers, security guards, trauma nurses, doctors, surgeons, therapists, more nurses, social workers, pharmacists, paramedics, and chaplains.

It’s a process that has become more frequent in recent years, especially since the start of the pandemic. In 2020, 45,000 people died from gun-related injuries in the US — the highest mark on record, a 14% increase from the year before, a 25% increase from 2015, and a 43% increase from 2010, according to the CDC. In Philadelphia, there were 562 homicides in 2021, 62 more than the previous single-year high point, set in 1990, when murder rates across the country reached record levels. That means there is a homicide in Philadelphia every 16 hours, and at the University of Pennsylvania Presbyterian Medical Center, gunshot victims have consumed the trauma bay: 18% of the hospital’s trauma cases are gunshot patients.

Twelve medical workers at Penn Presbyterian who spoke to BuzzFeed News described gun violence as a daily reality that leaves a deep emotional impact on them.

In 2018, as healthcare professionals advocated for gun control in the aftermath of high-profile school shootings in Florida and Texas, the National Rifle Association tweeted that doctors should “stay in their lane.” Medical professionals pointed out that gun violence is very much in their lane: They routinely encounter gunshot victims and see firsthand the grueling recovery and devastating ripple effects even a single bullet can cause.

More often than not in Philadelphia, it’s a police officer who transports a gunshot victim to the hospital in what’s called a “scoop and run,” which eliminates the time waiting for a paramedic. Gun violence is so prevalent that Sgt. Gregorrio Santiago said he takes part in a scoop and run nearly every day.

After “scooping” the gunshot victim into the backseat of a cruiser, police will alert hospital workers to be ready at the entrance to immediately put the victim on a stretcher.

“Just the concept of a police officer all bloodied up carrying this person and then us rushing them into the trauma bay — that scene and dynamic is far and beyond what normal hospitals see,” said Niels Martin, a trauma surgeon at Penn Presbyterian.

Once a gunshot victim makes it to the hospital, a security guard will frisk the victim and remove any weapons before a nurse and paramedic take them inside the trauma bay on a stretcher.
“When they do come in lifeless, that’s when you really know you got to work quickly,” de Hoyos said. Inside the trauma bay, which is part of the emergency department, the paramedic cuts the gunshot victim’s clothes off with scissors and locates and marks all the bullet holes on their body with paperclips and tape, to make them visible on an X-ray.
It’s “organized chaos,” said Jimmy Pisaturo, a paramedic at the hospital. 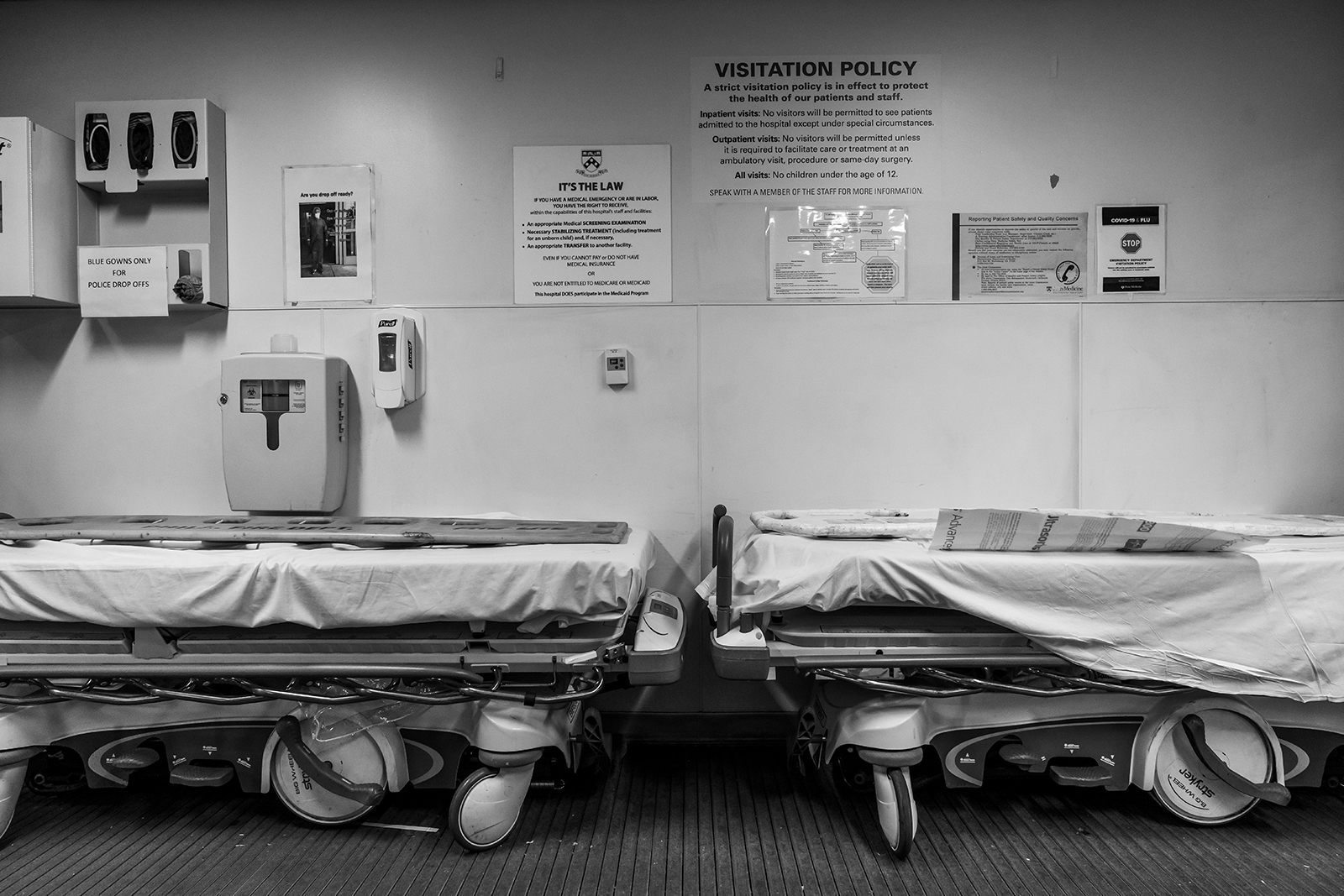 Around the bed, a paramedic gets the victim’s blood pressure and inserts an IV, while a nurse and a resident look for wounds and assess the victim’s mental status through a series of basic questions.
At the head of the bed, a doctor and two respiratory therapists put the victim on a ventilator if needed. A pharmacist is nearby preparing medications. A trauma nurse, called a “scribe,” documents every detail on a computer — what is said, where the wounds are, and whether any bullets are found. 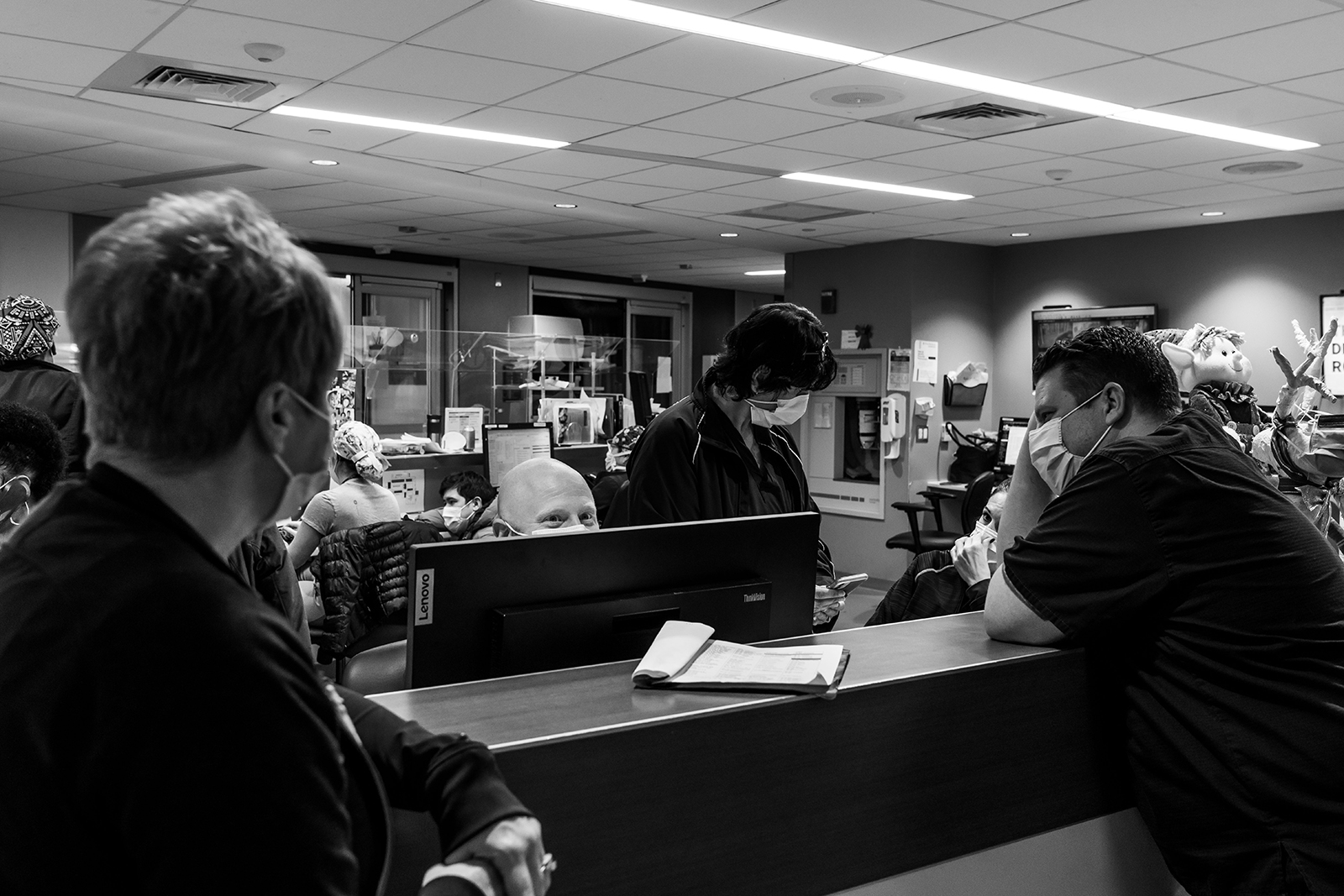 Within 10 minutes of arriving, the victim is out of the trauma bay and in the elevator with a surgeon and resident, heading upstairs to the operating room. 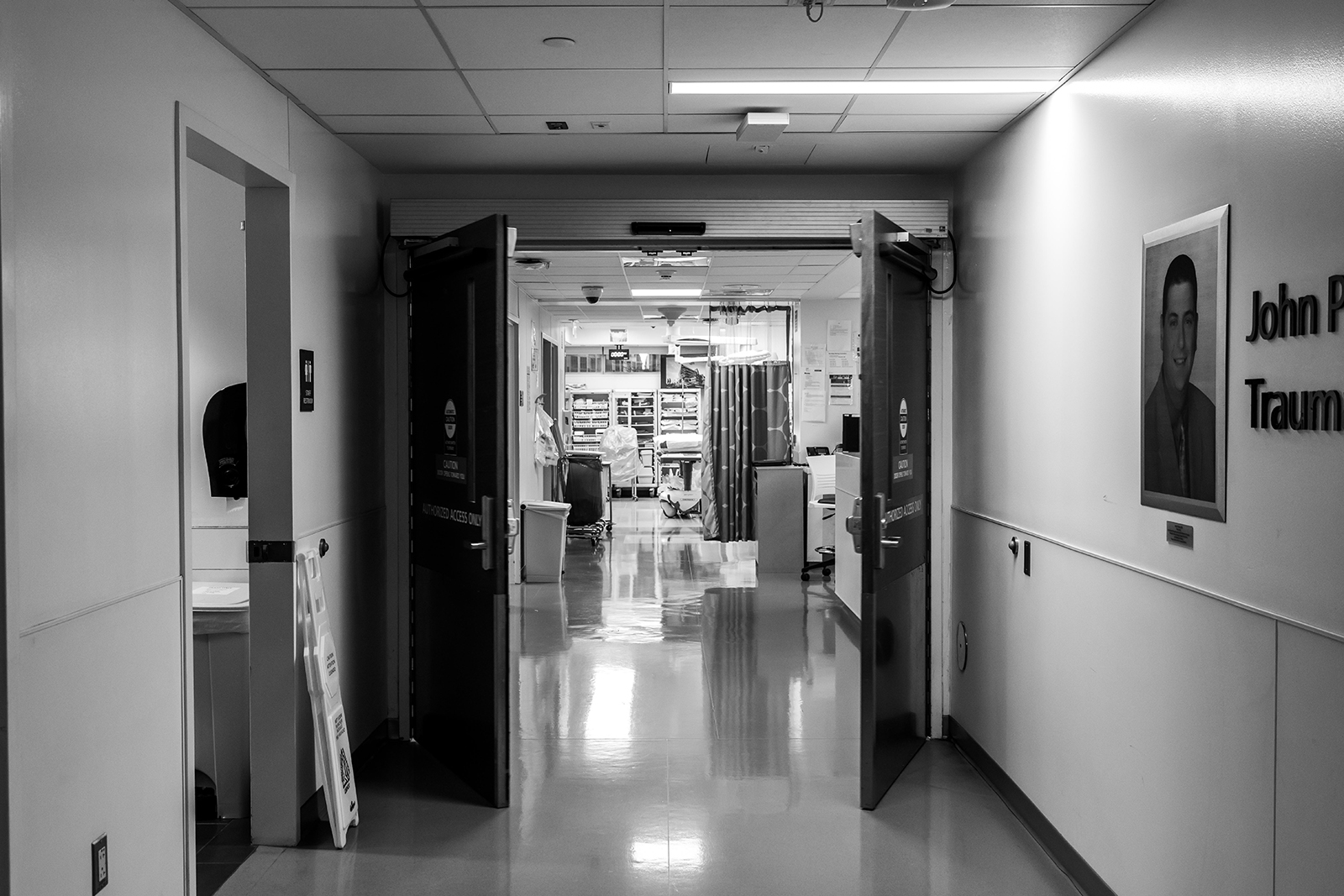 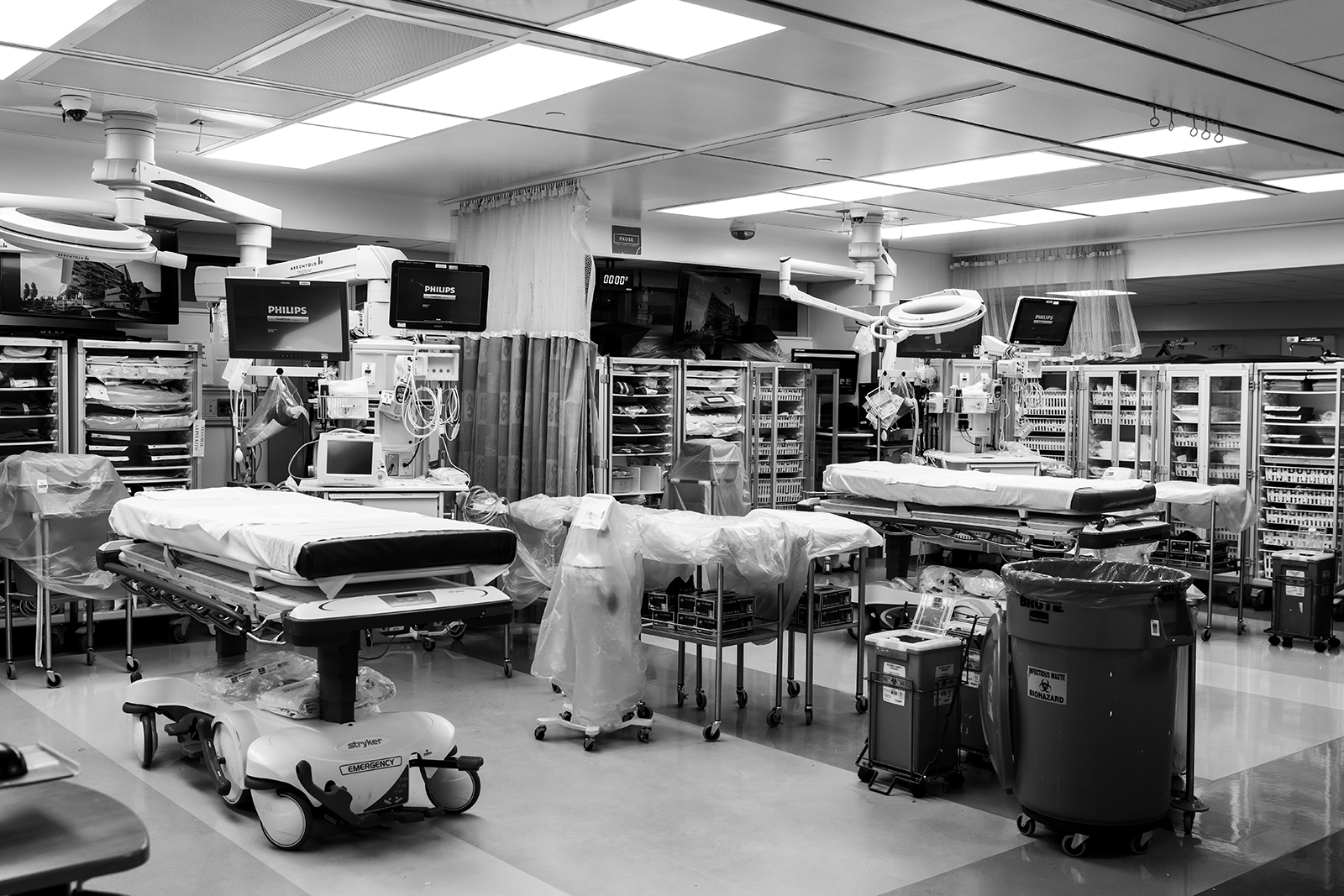 A gunshot’s acuity separates it from other types of trauma, like car crashes or falls. With those, there is usually something to help ease the trauma, like an airbag or limbs to cushion the impact. Bullets, in contrast, are designed to create significant harm, Martin said.

“Gunshot wounds bring a level of immediacy and haste more so than most other types of trauma,” he said.

Patients who need urgent surgery often end up in the intensive care unit, where they are assigned a team of nurses and a critical care doctor. Typically, gunshot victims have lost a lot of blood, so they need resuscitation, said Elinor Kaufman, a trauma surgeon. Many will not be stable enough to breathe on their own. ICU nurses and doctors are responsible for “thinking very systematically about every part of a patient’s body” multiple times a day, Kaufman said: assessing their neurological and cardiovascular status, determining whether they need sedation for pain control, a ventilator machine for their lungs, or dialysis for their kidneys.

Pulling the trigger of a gun might be a split-second decision, but that moment can lead to months of effort and labor to save the life of the person on the receiving end.

“How do I, as the trauma surgeon, guide families in terms of how they process the fact that someone has just tried to harm them or their family member?” Martin said. “Having to tell a mother that her son is dead is horrible. It’s probably the most horrible thing that I have to do. And it’s sad how many times I have to do that.”

Those who confront the consequences every day can feel helpless. Sunny Jackson, Penn Presbyterian’s injury prevention coordinator and outpatient practice coordinator since September 2019, was assigned about two patients per day in 2020.

“The whole city’s in a crisis,” Jackson said.

Even after a patient leaves the ICU, they’re usually still grappling with the emotional and psychological damages from the gunshot, Jackson said.

While the doctors and nurses might look at a patient as a medical problem that needs to be solved, Jackson said her role is to get to know a patient further into their healing process. She meets the patient’s “mamas, grandmas, and aunties” and starts to see their sadness settle in, she said.

Jackson begins looking for signs of acute stress disorder, which is what comes before PTSD. She said some patients are paranoid, jumpy, anxious, and easily upset, and a lot of times when they see her, they admit it’s the first time they’ve left the house since the shooting.

She said she acts as a gunshot victim’s “easy button” throughout their care and recovery, meaning patients can hit an imaginary “easy button” when they encounter any problems, and Jackson will be there, helping them find a new job, stable housing, or different types of therapy — all to make sure they aren’t a repeat victim. Still, she said, repeat victims are common.

“I take it personally,” Jackson said. “‘I’ve been here for such a short time, but you were here,’ and ‘I know you,’ and ‘Wait a minute.’ I’m in the morning report, ‘I know that name.’ And to flip back and be like, ‘You were here just four months ago when you were shot.’”

When things get overwhelming, she said, she gives herself positive affirmations, like “You are there,” and “You are their voice.” She regularly sees a therapist.

Samir Mehta, an orthopedic surgeon at Penn, said he has treated so many gunshot victims that he’s stopped asking how his patients ended up on his operating table. It’s almost like background noise, he said.

“I’m going to fix them no matter what,” he said. “We’re going to do a good job fixing them and a good job putting them together, and how they got hurt, what the circumstances of what their injury was — it’s not for me to judge or decide or anything like that.”

Recently, Mehta recognized the name of a patient arriving at the hospital. The victim was just 19 when he got shot the first time and broke his femur. Mehta fixed it and discharged him six months later. Six years after that, he returned with a gunshot wound in the other leg. “For a moment, you sit there and you pause and you say, ‘Wow, that’s twice now in six years that he’s been shot. What does that mean for him long term? Why wasn’t the first one a wake-up call?’” Mehta said he will counsel the victim — something that isn’t taught in med school — and tell him that if he keeps going down the road he’s on, he will “end up in a box.” But Mehta isn’t sure how much of his counseling sticks.

“I don’t want to minimize it, but it’s like loading boxes,” Mehta said. “You go to work, you load boxes, and then you come home and the next day, there’s just going to be more boxes to load. You can stay all night and load boxes, but at the end of the day, you can burn yourself out with loading boxes. You just go home and come back the next day.” ●