A lawyer reported getting a threatening call: “If you keep fucking with Mr. Trump, we know where you live.” But who made the call? And why? The FBI’s files blacked out all the good details. That was just the beginning of the hunt.

Before last November’s presidential election, a half-dozen former FBI agents told me that Donald Trump was questioned by the FBI about his business dealings on numerous occasions since the early 1980s. But the agents couldn’t recall the details.

So together with MIT doctoral student Ryan Shapiro, I filed a Freedom of Information Act (FOIA) request for all FBI records on the Trump Organization, Trump Entertainment Resorts, Trump University, and the Trump Foundation. When the FBI failed to respond, we sued, and the bureau turned over dozens of pages of documents.

One set stood out. It was heavily redacted, but it contained bits and pieces of a wild story about a person who told the FBI that he got a menacing phone call from a man with a thick New York accent who threatened his family. Intriguingly, the documents stated that the call came from a New York City phone booth across the street from the Ed Sullivan Theater, where Donald Trump was appearing that day as a guest on David Letterman’s show.

The person who received the call was identified only as “C” for “complainant.” But the FBI left behind several clues that helped us figure out that it was Kristopher Hansen, an attorney who represented a group of private investors in Trump Entertainment Resorts, who received the menacing phone call a day after the casino group filed for bankruptcy.

The cover sheet of the FBI complaint is heavily redacted with the exception of the accuser’s city and nine-digit zip code. When we typed the nine-digit zip code into Google, the law firm Stroock & Stroock & Lavan LLP was the fourth entry on the front page. A keyword search on the firm’s website for “Trump Entertainment Resorts” showed that 10 attorneys represented the casino group’s debtors and creditors but only one, Hansen, was listed as the attorney of record on the bankruptcy court filings.

BuzzFeed News made numerous attempts to reach Hansen at his office via email and messages left with his secretary. But he did not respond to our queries. We then obtained Hansen’s home address through a LexisNexis search.

Three weeks ago, we filed an open records request with the Township of Holmdel city clerk, requesting a copy of a police report filed by Kristopher Hansen on either Feb. 18 or 19, 2009. The clerk sent us a copy of the one-page report last week. It stated that Hansen is the attorney who reported receiving the threatening phone call. The police report also contained Hansen’s account of what the caller said, which had been redacted from the FBI’s documents. 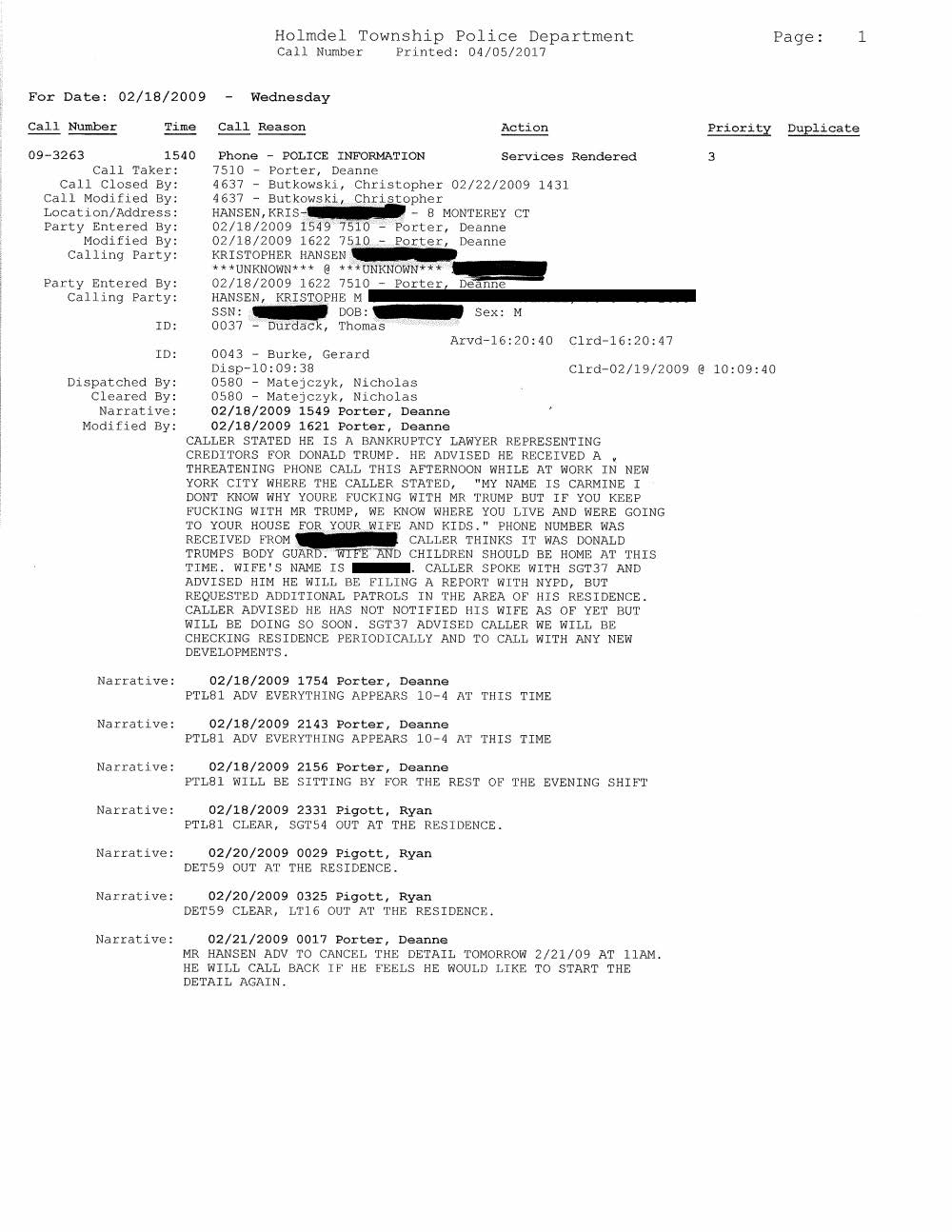 Got a Trump tip? Email us attrump@buzzfeed.com.To contact us anonymously, go totips.buzzfeed.com.