"Thank you for helping save my life by allowing me to choose," one woman wrote to an abortion fund that helps pay for women to have abortions they couldn’t otherwise afford.

By
by Ema O'Connor

LITTLE ROCK, Arkansas — Karen Musick wears comfortable shoes and holds a large rainbow umbrella, not to protect herself from the sun or rain but to shield women entering and leaving the clinic from the gaze or comments of the anti-abortion protesters outside.

Musick has been volunteering outside the Little Rock Family Planning Services abortion clinic for nearly five years, she told BuzzFeed News. She began as a volunteer clinic escort in 2013, during the annual 40 Days for Life campaign in which anti-abortion protesters gather outside the clinic, and others around the world, in larger numbers than usual for 40 days, typically in the fall, often proselytizing and holding up signs as women come in and out. But over time it became clear, she said, that they were needed more than just those 40 days every year. As abortion has increasingly become a hotly contested issue in Arkansas — which recently passed a ban on abortion after 18 weeks — and around the country, clinic escorting has become a year-round job for Musick and other volunteers.

After about a year and a half of escorting, Musick and two other volunteers decided to start the Arkansas Abortion Support Network (AASN), an abortion fund that helps Arkansas women pay for the procedure and helps get them to the clinic.

Abortion funds exist all over the US, working with local abortion clinics to help provide financial and practical support for women facing barriers to getting abortions. Some, like the Mississippi Reproductive Freedom Fund, provide any form of help they can, including helping women pay their bills or transporting them across state lines. AASN, however, is relatively young and only helps women within the state. But that’s still a lot of women.

abortion in america: BuzzFeed News looks at stories from the American South where networks of volunteers are helping women get abortions.

Related:
Abortion Rights Volunteers Have Adopted A Radical Approach To Get Around Restrictions In The South: “It’s Been A War”

She Tried To Get An Abortion For Five Months. By The Time She Did, It Was Almost Too Late. 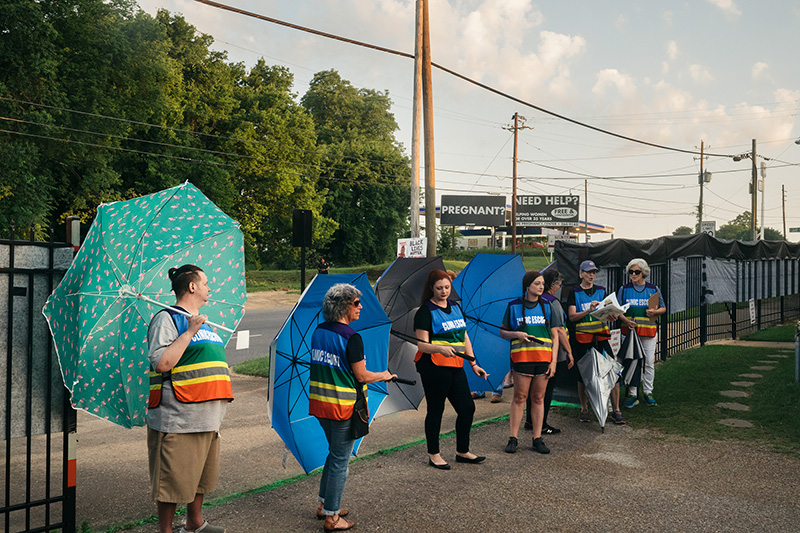 “In the three years we’ve existed, we’ve helped well over 200 women from Arkansas [with] in excess of $40,000 [in funding],” Musick told BuzzFeed News, standing outside the clinic and keeping one eye on the entrance in case someone was coming in who needed her help.

AASN helps supplement the cost of the abortion procedure or sometimes pays for it entirely. The network’s volunteers transport women seeking abortions who live within a 50-mile radius of the clinic and sometimes help arrange rides outside of that range. They also help women find lodging in the area if they don’t live in Little Rock and need to stay overnight for a two-day appointment, or if it’s more convenient for the women to stay in the area during Arkansas’s mandatory 48-hour waiting period between a consultation for an abortion and the actual procedure. Women can’t take children into the clinic with them during the procedure, so AASN will often help look after the kids during that time.

One day earlier this month, as Musick was standing outside the clinic, a staff member came outside for a smoke and a chat and handed Musick a manila envelope.

“There’s some good ones today,” she told Musick, smiling.

In the envelope were about a dozen anonymous letters to AASN that women had handwritten that day in that very clinic. While Musick was outside, the women were waiting to have their abortions in the clinic and writing the messages, thanking AASN for its help.

“These are always so powerful,” she said.

At BuzzFeed News’ request, Musick opened the envelope and began reading the letters aloud, standing in the shade outside the clinic door.

Toward the end of the letters, tears came to her eyes.

I struggle with a somewhat abusive, unstable relationship in which we already have one kid. He means the world to me, but I didn’t want to bring another kid into this world with the chance of his father not supporting adoption or abusing me about putting it up for adoption.

Early trimester abortion helped put me back on track with my life goals, and that was only possible thanks to the Arkansas Abortion Support Network and [the National Abortion Fund]. It helped a lot because I didn’t have the money and didn’t know how I would be able to take care of two kids with no help, thanks a lot I really appreciate the help and support.

I’m 37 years old, I have two children ages 12 and 1. My 12-year-old was diagnosed with a serious disease at the age of 1, my 1-year-old has been having trouble talking and I’m concerned she has autism. Daycare for her is $600 a month, she gets sick so much from daycare I ended up losing my job as a result. Now I have no source of income and I’m facing being evicted.

Thank you so much for your help. I am doing this procedure because I am battling with financial issues and I have a child that has a medical condition, so I’m doing this alone. I’m 28 and separated. I’m also a full-time grad student.

The father of my children got involved in federal drug trafficking, he has since changed his life but he faces a very lengthy prison sentence in a few weeks. Due to mandatory minimum sentencing laws passed by Congress, he’ll be in prison at least 10 years. That leaves me to raise two kids, and one completely alone. Having another child would be financial suicide. Things are going to be hard enough as it is.

Thank you for helping save my life by allowing me to choose.

Listen to the letters from women waiting to get abortions

This was an exercise AASN started a few years ago. The clinic workers ask women the fund has helped if they want to write their stories down while they await the procedure. The vast majority say yes, Musick said.

The Little Rock clinic’s director, Lori Williams, told BuzzFeed News that the work that AASN and other abortion funds are doing is critical for their patients.

“The funds have been extraordinarily helpful in getting our patients the care they need, essential in some cases,” Williams said. “We talk to every patient about their ability to access funding and programs that are available if they qualify.

“Travel is the biggest barrier patients face, and having to do multiple visits. As patients have more need and need to travel more with the loss of clinics, these funds have become more and more essential,” Williams said. “That’s been the most dramatic effect — not so much changes in the laws in gestation, but closure of clinics that push more patients from out of state into needing to come here.”

After five years of doing this nearly every week — and almost every day since she retired about a year ago — Musick knows everyone at the clinic. Throughout the day, clinic workers will come up to her to chat, sometimes offering her food and asking how the protesters outside are behaving.

There were only three that day, standing outside the gate. A middle-aged couple stood silently wearing sun hats and holding signs with Bible verses written on them. Another man stood near them, preaching through a bullhorn.

“Mind your own business!!” one of the medical assistants stood up from the bench and yelled at the protesters. “I’ll shove that bullhorn up your ass,” she added more quietly. Her colleagues laughed.

The clinic workers and escorts know most of the protesters by their first names and say the protesters know them by theirs. It’s usually the same people out there every day, the workers said. Some are quiet and just stand there, mostly not bothering anyone unless they are spoken to, but some of them yell all day at the patients and anyone else coming into the clinic.

“One day the protesters started showing up in our vests, in the same color, with umbrellas and clipboards, looking like us,” Musick told BuzzFeed News. The escorts cycled through several different vest colors to try to differentiate themselves, but the protesters would soon show up with the same ones and they had to start all over again. Eventually the clinic escorts decided to wear rainbow colors, thinking wearing the symbol of LGBTQ pride would finally dissuade the protesters from imitating them. But it didn’t.

"Thank you for helping save my life by allowing me to choose."

This is a newer method used by anti-abortion activists who find the more traditional methods of clinic protesters — fear tactics and shaming, for example — crass and ineffective. Instead, the “sidewalk advocates,” as they refer to themselves, attempt to blend in with the clinic escorts and approach the women to ask them if they really want to have an abortion, and refer them to the anti-abortion clinic that is usually nearby.

“We’re used to it being crazy out here sometimes,” another clinic worker told BuzzFeed News, puffing on a cigarette. “Look at where we are and what we do; you gotta grow a thick skin.”

A medical assistant standing nearby chimed in, saying she’s worked at the clinic for seven years.

“I can’t be out and proud about where I work. I can’t tell people where I work, but I love fighting the good fight, I really do, and I’m gonna continue to fight the fight.” she told BuzzFeed News.

“You know, I gave my first baby up for adoption and that wasn’t for me, just like abortion isn’t for everybody. Doing that killed me,” she added. “We deserve to have a right, to have a choice; that’s all it is.” ●