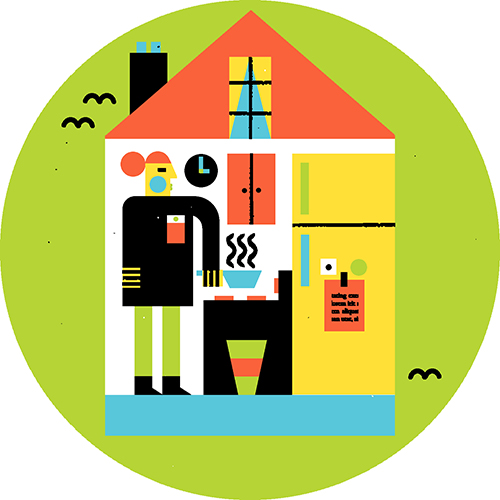 2021 was our second year of working from home and the year we really ramped up our home cooking efforts. How’d we do it? Ordering frozen soup dumplings by mail, fancy pizza ovens and grills, and an unassuming, but incredibly effective herb preserver.

These items were independently selected by staff and except where noted, they spent their own money on it. Just so you know, BuzzFeed may collect a share of sales or other compensation from the links on this page if you decide to shop from them. Oh, and FYI — prices are accurate and items in stock as of the time of publication.

The Traeger Ironwood pellet grill is hands down the best thing I have tried this year largely because it is responsible for so many exquisitely smoky meals but also because I am a huge barbecue dork and this may well be the holy grail (Traeger loaned BuzzFeed a grill to review). I have yet to cook a bad meal on this thing, and I have cooked more than a few of those in the past on our former grill (RIP) — despite, say, setting multiple overnight alarms to check the grill temp on a 32-hour brisket. It’s hard to explain the catastrophic despondency and frustration of discovering that a brisket you have obsessively babied with techniques painstakingly sourced from 50 different BBQ subreddits looks and tastes like the bottom of an old flip flop. But the Traeger pellet grill has, for me, made that a thing of the past. Instead of charcoal, it burns pellets methodically fed to it by a temperature-controlled auger that capably holds a slow-and-low smoke for as long as you need it to (and has a special “super smoke” feature). And it has nailed everything I’ve cooked on it — chicken, ribs, brisket, pork shoulder, sausage — in a way that’s often inspired “this is your best INSERT FOOD HERE yet” accolades from family and friends. Honestly, I wish I’d saved up (it is not cheap), gritted my teeth, and bought this a few years ago. —John Paczkowski

This Seattle-based restaurant will mail you a packet of 50 frozen soup dumplings (xiao long bao) that you keep in your freezer and then cook drunkenly when you come home late but want to reward yourself with the most delicious food known to man.

For the uninitiated, soup dumplings are humanity’s greatest achievement. You bite the top off, sip out the delicious filling, then consume them with the sauce of your choice. Incredible.

These ones are filled with either pork, shrimp and pork, or chicken. Of course, they also sell the accompanying sauces. There’s the classic vinegar, as well a chilli crisp oil that deserves to be studied and a ginger and scallion umami source which I want to bathe in. They also sell bamboo steamers if you need one.

They even offer a VIP Dumpling Program where they’ll mail you packets every month if you want, which is a truly spectacular idea for which they deserve to make a fortune. —David Mack

I had never heard of tomato pie until this summer. If you had asked me if tomato pie was a thing, I suppose I would have said yes? I don’t know. Life before tomato pie is all a blur. Here’s what I remember: going to a farmers market on the way home from a weekend at a rental upstate, being overwhelmed by the produce selection, and almost doing what I always do when overwhelmed by farmers market produce, which is buy some token non-produce item (a baked good, honey, soap) and leave, but then my husband said, “What if we buy a bunch of heirloom tomatoes and make a tomato pie?” It was such a sure-footed plan, offered up as though we had ever made a tomato pie before, that there could be no response but to buy those tomatoes and make that pie. I would provide a recipe, but I actually just googled around and cobbled together a few. The gist is this: You cut up the tomatoes and drain them a bit, you layer them in a pie crust with basil, and then you top it off with a mozzarella/mayonnaise mixture that doesn’t taste mayonnaisey once you’re done. Then you bake it. It’s basically like a fresher, tomato-first take on pizza, and it’s the best possible solution to late-summer farmers market decision fatigue. —Sam Henig

I lusted after this pizza oven for several years before I finally bought it, and when I did buy it, it was as a Christmas gift for my dad. But playing with his forced me to pony up for one of my own. It was just too good.

I choose to believe that jam can be classified as tech because my body is a machine and food makes it work. This summer, I was expecting to make up about 50% of my food intake with fruit. But for whatever reason, I couldn’t get the fix I needed; almost all the stone fruit I ate was grainy and tasteless, not at all the sunshiny flavor I craved. So I decided to make up for it with fancy jam in the fall and winter. When I say fancy, I mean that this stuff is $16 a jar. But Alessandra Gordon, a second-generation jam-maker, makes the headiest preserves from plum varieties I’ve never heard of. This jam is not at all too sweet; one spoon of the rich, dark Hanabi Plum jam on yogurt tastes like something I’d pay $15 for at a really, really nice brunch place. It’s basically saving money. Plus, once you consider that the company’s base wage is $18 per hour and the staff is all people of color and/or queer, the price feels more than right. —Estelle Tang

My wife tersely refers to the Anova Precision Oven as “another of your unnecessary kitchen gadgets.” And yet, she has eaten, with great gusto, the cooked-to-perfection focaccia I’ve made in it. She has also eaten the baguettes I made in it during a baguette marathon that had me baking bread every two days for over a month. And that pork shoulder slow-cooked for 12 hours in a sous vide steam bath? She ate that too. Same thing with a *shockingly* good pizza. So sure, it’s unnecessary, and yes, it is perhaps reckless to spend $599 on an oven that cooks with steam when you already have a real oven. But steam makes for better bread crusts, and cooking sous vide gets foods at the perfect temperature pretty much without fail. And this thing kind of does it all — air-frying and baking, included — and it does it well, and you can run it from an app on your phone. If my kitchen and bank account were both larger, I’d probably buy one. (Anova loaned BuzzFeed an oven to review.) —John Paczkowski

After years of watching cilantro and basil rot in the fridge, I finally broke down and bought an herb preserver. My husband and children were highly skeptical, but the cilantro was fresh and green a full TWO WEEKS later. I enjoyed fresh cilantro on three separate dinners (if you’re wondering: guacamole, butter chicken, Vietnamese tofu, and pork). It fits perfectly in the door of the fridge, and at only $13, it’ll pay for itself in a couple of months easily. —Dao Nguyen

Look, I am fully aware of how ridiculous it must seem to be endorsing a $119 kitchen gadget that is essentially a piece of steel plating pulled off an aircraft carrier, but this thing has proven to be an incredible ally when it comes to baking bread, pizza — anything with a crust, really. The Original Baking Steel is just that — 16 pounds of it. And because steel retains and conducts heat more efficiently than other materials, it can pizzeria the hell out of your kitchen. The Baking Steel’s creators claim it can function as the “equivalent of a 900° wood-fired oven despite being in your 500° home oven.” I have no idea whatsoever if this is true. What I can say is that the bread and pizza I have cooked on it definitely looked and tasted like it, which is all that matters, really. —John Paczkowski