Abortion Rights Volunteers Have Adopted A Radical Approach To Get Around Restrictions In The South: “It’s Been A War”

“We say every year, ‘That was the worst year yet,’ and then the next year it’s even worse.”

By
by Brianna Sacks

Caitlin Gaffin was grabbing coffee when her phone buzzed. A woman living in a tiny, tucked-away town a few hours away urgently needed to get to Washington, DC, for a second-trimester abortion. She was blind, alone, and had no one to take her. That part of rural West Virginia doesn’t have a taxi service, let alone ride-hails. Even if it did, she couldn’t afford the $300 round trip. Her appointment was the next day and she was desperate.

“I knew how isolated she was,” said Gaffin, who had two abortions while growing up in West Virginia and now codirects Holler Health Justice, a reproductive rights nonprofit that provides financial and emotional support to those seeking abortions. “It was a kind of barrier we hadn’t faced before, but I was determined to find a solution.”

The 31-year-old volunteer got the email at 11:25 a.m. Within two hours, “reproductive justice” groups in multiple states jumped into action to get the woman to her appointment, highlighting how a network of volunteer groups across the country has sharpened its strategy and adapted tech platforms to combat the onslaught of laws that have forced hundreds of providers to shutter in recent years.

abortion in america: BuzzFeed News looks at stories from the American South where networks of volunteers are helping people get abortions.

Related:
This Family Has Dedicated Their Lives To Helping Women Get Abortions In The South

She Tried To Get An Abortion For Five Months. By The Time She Did, It Was Almost Too Late. 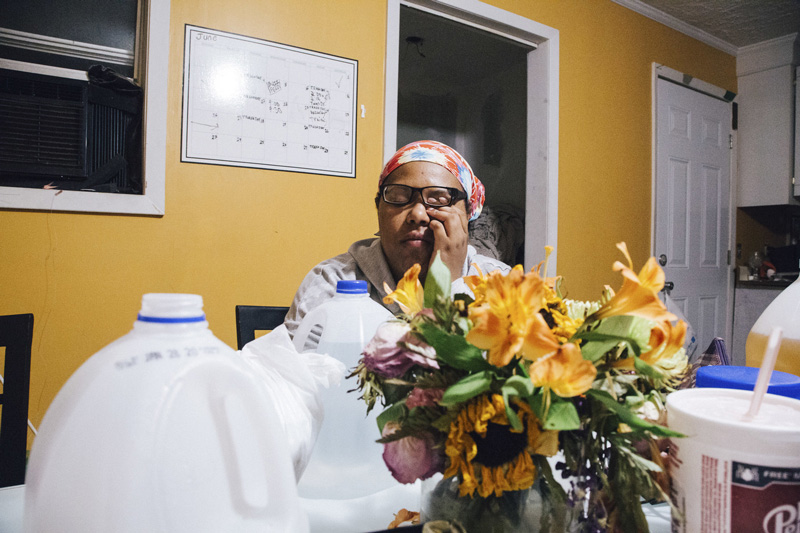 Currently, six states in the US have only one abortion clinic, including Mississippi, Kentucky, Missouri, and West Virginia — and more and more states are passing laws that make it harder for women to access abortion, sending these already-swamped volunteer groups into overdrive.

Over the past few months, the issue has reached a fever pitch as Ohio, Georgia, Mississippi, and Louisiana passed bans on abortions after six weeks, and Alabama passed a total ban on abortion. The funds have been working on this for decades, but if the courts allow more bans to go into effect, and if the Supreme Court overturns or significantly weakens Roe v. Wade, the future of abortion access in the US could rely on these funds and their network.

“It’s been a war,” Gaffin said. “Each legislative session has been increasingly more combative toward reproductive health access. We say every year, ‘That was the worst year yet,’ and then the next year it’s even worse.”

By 1:30 p.m., Gaffin and two other out-of-state funds coordinated how to get the blind woman from the eastern panhandle of West Virginia up to DC, which has been seeing a growing number of patients needing abortions for terms past 21 weeks as laws in other states become more restrictive, including the so-called heartbeat bills that ban the procedure after six weeks.

Holler Health found a taxi service in a neighboring county and, for $300, convinced a driver to travel to the small Shenandoah Valley town, pick up the woman, and take her to the clinic in DC. The National Abortion Federation — which works with dozens of reproductive rights groups across the US — DC Abortion Fund, and Richmond Reproductive Freedom Project helped pay for her procedure and other expenses.

“We all are a combination of social workers, counselors, travel agents, and fundraisers,” said Katie, a 36-year-old volunteer with the Knoxville Abortion Doula Collective who asked that her full name not be used for privacy reasons. “We knew this was coming and we’ve been preparing. We’ve been mobilizing and building resiliency by creating this network of groups in the southeast who are lifting each other up.”

Using everything from fax machines to Facebook, a collection of funds and nonprofits — including the Yellowhammer Fund, Mississippi Reproductive Freedom Fund, Kentucky Health Justice Network, and the National Network of Abortion Funds — has helped hundreds of people from states like Kentucky, Florida, Tennessee, Alabama, and West Virginia get to clinics they otherwise would not have known about or been able to reach, some as far as Colorado and New Mexico. That means setting up a system, executed through a large encrypted group chat, to shepherd patients across state lines; pay for hotels, gas, food, and childcare; and find companions, drivers, and doulas.

“We built this because so many people were approaching us asking how to self-induce abortions. We get texts from Pennsylvania, Minnesota, Michigan,” said Kate G., an activist who spearheaded the network from New York about three years ago (she did not want her full last name used to protect her privacy). “People don’t realize that a post-Roe society is already here for many because they can’t get to a clinic.”

Manipulating shoestring budgets supported primarily by individual donations — the average being about $25 from a new crop of young supporters, and mostly amassed through social media — volunteers have been pooling their knowledge and tools, including custom-built communications software, to help a growing number of desperate patients who are being bombarded with false and misleading information.

“Most people don’t know that if you live in the middle of Tennessee, it might make more sense for you to go to Kentucky for an abortion,” Katie said. “We get calls from Chattanooga from people asking, ‘Where do I go?’ How would you know the best place for you is out of state? That’s because it’s hard to get information, and people don’t know their options.”

If Hailey hadn’t heard about Holler Health Justice from a friend who had an abortion, she said her life would have been ruined (BuzzFeed News agreed to use a pseudonym to protect her identity). The 22-year-old lives with her dad and had absolutely no idea where to turn when she discovered in a drugstore bathroom that she was pregnant after the “piece of shit” guy she’d been dating for four months took off his condom during sex.

“If it wasn’t for them I would have had no choice but to have that child because I had no support.”

Growing up, no one in her town or school talked about abortions, so when her gut lurched and she knew she needed one, she considered it sheer luck that her friend told her about the fund she’d seen on Facebook.

When she messaged the group late one Wednesday night in April, Gaffin promptly replied.

“If it wasn’t for them I would have had no choice but to have that child because I had no support,” she said. “It’s crazy because I had never even heard of them, but I wouldn’t have been able to do it without them. They don’t ask questions, they just help you.”

The reproductive justice groups have also created their own system of redistributing resources on an emergency basis. For example, one woman in Tennessee recently had to use her savings to pay for her mother’s funeral, and then needed an abortion. When the Knoxville Abortion Doula Collective couldn’t quickly raise about $700 to help an especially complex case, it tapped into the network — Yellowhammer covered the hotel and the Kentucky Health Justice Network jumped in to pay for the travel expenses.

Many of the fund members communicate all day via a group chat on the encrypted app Signal, which they use to let each other know if they need “solidarity funding” for a client, or if they just need to complain to people who understand how hard the work is.

“National organizations aren’t able to support folks in the timeframe that they need on the ground, in that moment,” Katie said. “They aren’t really showing up to help us, either. We would like it, but it’s not happening.”

Planned Parenthood said that while it works closely with reproductive health affiliates in every state, the organization fills a different role in the fight for abortion access because it respects how entrenched abortion funds are in their communities, calling them “essential experts” who have been at it for years.

“They are the heroes of this movement,” said Nia Martin-Robinson, Planned Parenthood’s director of black leadership and engagement. “These are the groups that become your family when you don’t have the means or support to navigate an increasingly hostile environment just to access abortion. As we see more and more restrictions sweeping the country, these groups will continue to be even more critical — especially for the patients and communities we serve.”

“I’ve had times when I want to throw in the towel because it is very hard work and we get attacked.”

Different collectives and funds will step in when there is a lack of funds, especially if the clients are high-need, such as homeless, gender-nonconforming, or need a later-term abortion, Kate G. added.

“We have many clients who are survivors of sexual assault,” she said. “The national organizations just don’t do this work. They’re all advocacy, they aren’t on the ground.”

Many funds provide what they call “practical support,” including transportation for women seeking abortions, lodging, and sometimes food and childcare during the trip. The Mississippi Reproductive Freedom Fund goes even further, sometimes paying utility bills or rent for those who prove they used their money to pay for an abortion instead.

Abortion doulas working for the funds sometimes accompany the women to their appointments. Many have had abortion themselves, so they can answer honestly when women want to know what to expect.

Other funds have staff and volunteers who work as clinic escorts, making sure women coming to the clinic don’t get harassed by anti-abortion protesters outside, or that they aren't fooled by next-door operations posing as providers in an attempt to dissuade women from going through with the procedure.

To help meet the growing need and push back against an increasingly hostile narrative, the groups have created a brand that includes sassy shirts, drinking games, and blasting bold, original artwork and petitions across Instagram and Facebook with messages like, “A client needs $530 for travel and procedure costs,” along with their Venmo accounts. They also share each other’s posts and tag one another in fundraising initiatives and uplifting photos.

But most importantly, the volunteers are sharing what they know. They’ve grown up in coal mining towns and Baptist churches. They understand what it’s like to not have cell service or access to a car, to go to a school that doesn’t say the word “abortion.” They send memes, care packages, and messages of support — all while maintaining other jobs (sometimes multiple) and taking care of their own families and other obligations.

“I’ve had times when I want to throw in the towel because it is very hard work and we get attacked,” said Kate G. “But then you have this group that supports you with open arms, and the people we get to help, every single one is so grateful and we’re so glad to be there for them, and I realize how lucky I am.” ●

More on abortion in america